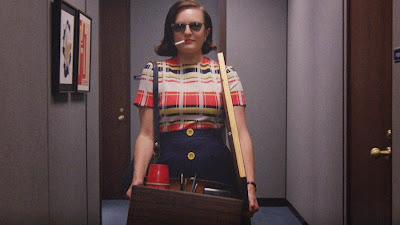 I don't know if Mad Men was one of those shows you loved or hated.

I do know it seemed to be one of those shows you've seen every episode, or none at all.

While 710 was a viewer from the beginning, I came late to it, though I eventually caught up.

Rarely did we watch it real time. With the advent of the DVR, there was zero need.

But with the now final episode, we stayed up past our bedtime to watch - so we didn't have to hear how it all ended - the speculation, analysis and recaps - the following day on-line.

Note: there might be spoilers in here if you have not yet seen the last episode.

While I suppose many feel that potential sociopath, Don Draper is the star / focus, I always saw the compass to be either Peggy Olson or even Sally Draper. Those two women, at very different stages of their lives, showed the most grown and progress.

Don, if possible, was a complex, yet almost one dimensional character. While it could be argued he experienced turmoil and change throughout the seven season, basically, he never changed. Not truly. The surface was booze, women, cigarettes along with some advertising which in itself was a metaphor for not seeing the real product underneath. But that surface never truly seemed to be hiding much of what was bellow. I think it hid more of what wasn't there.

And that is a testament to Jon Hamm's acting - he can pull all that off and you still kind of care about him.

Even in the last few episodes, while on some kind of search to find himself (again?), it could be construed that Don was just morphing into someone else....yet again.  Or he could have centered himself and returned to his NYC life. His last conversation with Peggy was regarding the Coke campaign. I don't think it is an accident that Don "found himself" and the show ended with possibly the iconi Coke ad. Either he truly found himself - or ended up back at the agency creating that ad. Or both?

You can take from the ending what you want.

I will give the final episode this: it churned out two of the most nuanced performances from Jon Hamm and January Jones regarding Betty Draper and her health. Neither of these characters seemed to dare show much real / true emotion throughout the run of the show (save some resentment and anger) and with that one all to brief (but perfectly timed) scene - they nailed it.

For the vagueness of what happens to Don, creator Matthew Weiner almost all to easily wraps up the other storylines, but it doesn't seem too forced.

For the last year or so, anytime I'd see Stan (who was always kind of funny and cute-ish) and Peggy - I'd turned to 710 and say "oh come on - just do it already'. And while they didn't, we got an even better thing.

But Peggy is possibly the most developed character in Mad Men. From secretary to creative executive, she's come the closest to having a true and honest relationship with Don - even more than either of this two wives. And certainly more than the 184 women with which he's slept.

Pete, Roger, Joan all have tidy endings wrapped up in a bow - however loosely tied.

Only with Sally Draper do we have somewhat of a downer.

In certain ways, she was the only grown-up of the show, even as a child. She saw more and learned more than any of the other characters - peering into most of that adult world and leaving with take-aways: more of what not to do, than with how one does / should behave. Even with her last conversation with her father, when he tries to assert the parent role, Sally is clearly more the adult.

In certain ways, Sally fulfills her destiny of truly becoming the adult in the Draper household, just as Betty had done before her after watching her mother die.  Sally, like Betty, becomes an adult much too early in life and no doubt unfulfilled and possibly not that happy of a person - just like her mother, the woman she rebelled against for so long.

I really had no idea on how the show would end. I thought maybe Don would fall out of a window, as the opening of the series shows implies (or that silhouette could just be falling through life). Even a few episodes back, Don rattles the window in his new office, but I'm sure that was more a nod to people who thought it might end that way.

Mad Men was a good ride, yet I'm not unhappy it's over. The timing seemed right and it never overstayed its welcome. And usually every episode was very well done. And you can't say that about most television shows.


Song by: Belinda Carlisle
Posted by Blobby at 12:09 AM

I fall into the 'Watched It A Few Times Then Quit' category.
I tried to like it ... Jon Hamm is My-Husband-In-My-Head ... but I just didn't care about the characters.

I fall into the never saw a single episode category.

I purposely did not read this as I am still plodding away through reruns in seasons 2-3. At the rate I am going I will have to restart as I've already forgotten things.