While not invited, my nephew Matt graduated from high school earlier this week.

Before you all get bent out of shape about the non-invite, I was ok with it.  You know - 300 graduates, most have two parents and the x amount more tickets available after that. I do think the grandparents and siblings should get the first shot.   ...and except for Matt, I knew no one else, so it was better my parents went.   They at least live in the same school district.

...that and the ceremony is held in a church to accommodate that amount of folks, so you know if I darkened it's doorways, there'd be floods, tsunamis, frogs, locusts, rivers of blood start flowing, or at the very least, lightning bolts fly from the sky.

We did get to celebrate his big day last night.   Nothing big, just as he requested. It was just cooking out at his parent's house - the same as it was for his sister when she graduated two years ago.

My sister was all 'whaaaaaaat?' at the amount we gave him on his check, but it was the same we gave his sister, which was the same we gave for the bar mitzvahs.  He can put it towards something he wants or pizza and beer money for when he starts college in two and a half months.   ....and yes, that is a beer in front of him.

He also got a new MacBook Pro, so he can take to school.  He was excited as a 18 year old boy gets....which is to say.....not.  But he did sneak inside and boot it up and start using it, so I think he's pretty jazzed about it.

I also got to see my favourite boy.  I do love Boomer, but I LOVE Petey. 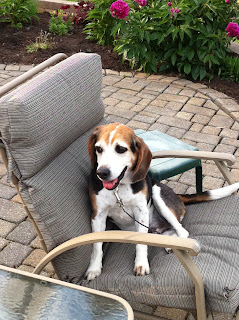 Petey's chair.  I'm sure they didn't buy it for him, but he sits here daily to survey the yard - keeping it free from beavers (yes, beavers!), rabbits and......well, that's it.  He doesn't bother the ducks or geese who come in the yard at all. 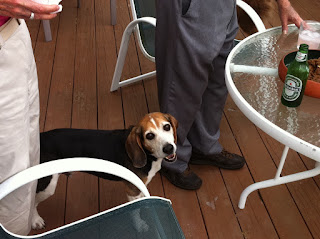 Hoping against hope that something falls off the table.  ....or that my father feeds him.  Nothing did - except hugs and kisses from me.  He took them, but that's not what he was looking for.

Yeah, my son had to admit getting a MacBook Pro AND an iPod 2 might be kinda cool. Maybe. But he's already shown me what he's doing on them. Games, of course.

Soon we will be lining up a tutor so he can learn how to make an App. That's going to be his school for now.

We are living parallel lives,(unfotunately with no Denton for me).
Nephew's HS graduation today. In their gym.
If only my contribution ellicited a whaaat?

Parallel on my end also – I guess it’s the season. Yesterday we had a grad party for my niece Katie who will now be attending Coastal Carolina on a volleyball scholarship. Small world huh. However, on my end I did snack the heck out of the dogs.

You didn't give me a fat check when I graduated high school! Or college! ...three times... (LOL my word verify is BRACARS!!)

Petey and Scooter would get along famously...I just know it.