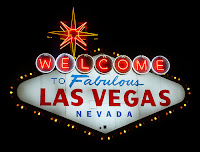 It was a whirlwind two days but I've been to Vegas and back.  Actually, it was less than two days.   Flights and all took about 34 hours.

I would say it was all work, but on Monday night I did hang out with my long-time (I did not say "old") friend, David G.

David and I go back some 27 years and we never see each other enough, but now that he and his partner Duck have moved to Vegas and I now have a client there, I'm hoping to be able to see him every month or two.

David took me to task for my Cardigans post on Monday - and my entire My Music Monday series.  He says I'm coasting.  Is this true?    Yeah - it is.  with work travel and stuff, I'd say it's an easy 50 or so posts per year, but trying to find a decent song is harder than one might think to put up there.

We could have gone to their house to hang, but maybe another time.  It was late for all of us - or really we had early early days the next morning, so we opted to have a drink - one - at the newest place in Vegas, the Cosmopolitan.

Last time I was in town they were still building it.  I'd look out our hotel window and I'd count the number of cranes there were on site building this thing - and the entire complex.  1500 workers per shift erecting this group of buildings.  I'd say it was nice, but it is not all the different than many of the other casinos and lounges that are out there.  But now I can say I have been.

All my miles are finally paying off - the upgrades to 1st Class.   I don't care about the food or the drink - I care about the wider seats, the legroom and to be honest, that I only have to share a bathroom with 11-23 other people, not the other 200.

I normally do not watch movies on flights, but they were showing the Adjustment Bureau and it looked interesting even if it god iffy reviews.  Naturally, the movie's sound was all static so they replaced it with - ugh - Unstoppable. I think they meant to call it Unwatchable.   (seriously, how many runaway train movies can Denzel Washington make?)

Total spoiler alert:  they totally stop the runaway train.  But you knew that, right?

The entire time it was on (I opted not to really watch), I could think of Lionel Hutz and his quote: "This is the greatest case of false advertising I've seen since I sued the movie The Never Ending Story."

1st class is the one time I don't mind having a window seat either.  And some of the sights going west are just beautiful. 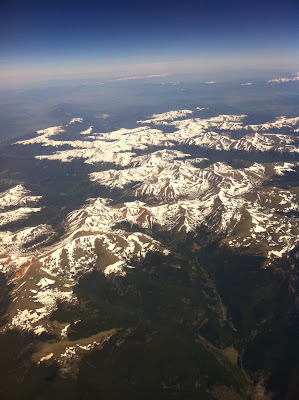 Ya gotta love the Rockies. 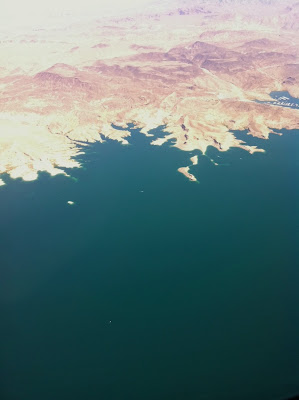 Not the best shot of Lake Mead, but it's cool anyways. 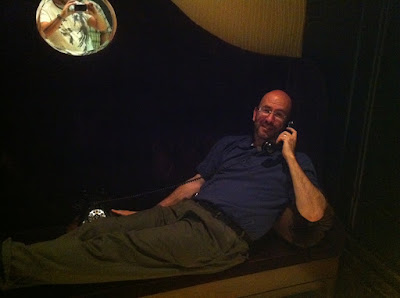 Definitely not the best shot of me, but the other one has me sitting in an oversized high heel shoe.  Unfortunately, it does not reside on my camera, so I'm kind of at the mercy of Duck on where that ends up.  Here's I'm just using a lounge chair to make a fake call, so they could take the picture.  It was totally their idea.

So that's it.  I flew back last night, getting home around 12mn....and I'm up and ready for a full day.  I really need to find flights with WiFi so I can work on the plane.  I feel so far behind at this point, but whatta gonna do?

Song by:  Brandon Flowers
Posted by Blobby at 7:12 AM

I totally believe that first class is the only way to fly, besides business. It's like flying used to be in the olden days (even coach class back then wasn't so bad). Comfortable, cool, nice. Unfortunately, I'm usually stuck in coach anymore. And we all know how that is these days. Ugh.

Glad that you can fly happy.

your business travels sound both exciting and exhausting to do !

It was really great seeing you Blobby! You seem younger, smarter, more athletic and more handsome than ever!

(I think that's what you wanted - did I say that right?)

Thanks for not going off-script David. The check's in the mail.