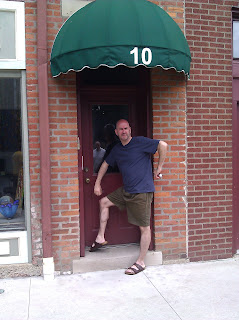 While in Columbus over the Memorial Day weekend, we all traipsed......yes, traipsed....through the Short North.

The Short North is now a horribly trendy 'hood.  Back in the day, before it was up and coming, it was not quite there yet.  It was not so (over) developed and pricey.  When I first moved there in 1986, I lived across from a place that was called the T&A Cafe.  "Ladies" danced in the windows and there were signs outside that said 'boxed lunch specials'.  Indeed.

Even backing up a year, the Short North was where Denton was living when I met him.

And then scootching up to 1989, it is where I moved back to, and into the same building as Morty and Dith.  I have mentioned in passing, we were the only two apartments in the building.  Many a-time, we didn't even lock our apartment doors for easy coming and going.

The first Saturday of every month is/was the Gallery Hop.  One would tend to stay in on that night, as you'd never get your parking space back if you ventured out.  More than once we had dinners where people would stop by and maybe once during a Hop, a drunk Blobby danced in the window in red briefs and in only red briefs.  It might have been viewed as 'performance art', but trust me, it was not.

So this last Saturday, as we attempted to avoid throngs of people doing a bar crawl (at 13:00!), to raise money for cancer....but ironically enough, not for cirrhosis.....we ended up eating a block away from where we lived until I moved out in 1993.  Morty had moved out first and when I got a place with Denton, that left Dith as the only surviving original tenant.

We had good memories there.  We had some tough ones too (oooh, appendix and cancer - mine; and one very very mean kitty - not mine).  We were young and going through a lot, as we do when we grow up.  Clearly, we are stronger for it.   Well.....clear to us, maybe not to you.

So as we were walking back to the car, Becky got a scathingly brilliant idea to ring the doorbell and go on up and see the old place(s).  No one else seemed all that interested, save me.

She rang both bells and lo and behold, the folks who lived in my apartment came down and agreed to let us up to see the place.  You could see the skepticism in this young guy's eyes, but his "roommate" was there too and we are fairly harmless - unless you cross us.

It was such a fucking trip going back like that.  I have never done that in any house I ever lived in - on my own or as a kid.  But to be transported back 20 years.  Freaky.

As much as the apartment had changed, it remained the same.  The "plush" variegated brown carpeting was gone and rustic hardwood floors were now present.  I'm not sure if those were under the carpet or installed later.  One entrance door was completely missing (yes, I had two) and they had rearranged the kitchen for some reason, but I swear the appliances were exactly the same.  My mannequin with the cowboy hat had long been tossed out.

Actually, we weren't even up the steps (there are like 25) when Becky blurted out to the current tenants:  "have you guys seen any ghosts?".

If you recall, I have told my tale of the apartment ghost.

Both "roommates" acknowledged a ghost themselves: seeing it and things moved that cannot be moved without a 20 ft ladder.  I feel totally vindicated.  I think they totally felt weirded out bit, by all we knew and that we were actually there.

But they asked about what the apartment had been like. I think they asked why I moved and I told them to move in with my partner.  Oddly enough, this was their last day in the place.  They were packing up and moving to the same street where Denton and I moved too.  Freaky.

Ditto took the picture of me outside the front door.  You can embiggens it.  If you do, you kind of catch a reflection of my husband.  You also almost see my beady eyes.  What's up with that?   But on the plus side - you get to see my well developed calves.   Working out has some benefits that don't include increasing my HDL.

Of course, the killer was, everyone else waited down the block for us and wanted a full report.  Why they didn't come up, I have no idea.  I'm guessing it was the 25 stairs.

Not the stairs. I just wanted to remember it as it was.

You and I wear the exact same Birkenstocks. Mine are 10 years old and I'm due for a renewal.