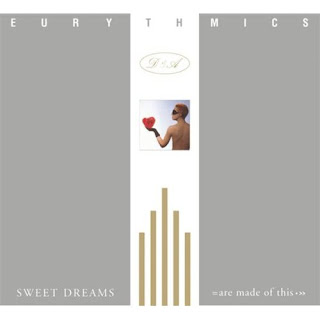 Technically this is not the Eurythmics' debut album.  In the Garden was never released in the U.S. until after the success of Sweet Dreams (are made of this).  And there was good reason why that true debut never hit these shores.  Trust me.

If for nothing else, I was drawn to Sweet Dreams, was that the title track finally knocked the Police's "Every Breath You Take" off the top of the Hot 100 in the Spring of '83.   Don't get me wrong, it was a great song, but man, it was way overplayed before it made it to the top of the chart.

In some ways, so was "Sweet Dreams", but it was new.  New Wave was still there, but the face of melodic and electronic pop was just starting to really make its mark and the Eurythmics had it.

As the band's disks go, this is a fair one.  I think they had much better overall recordings with Touch and Savage.  But Sweet Dreams is strong, even if chances are the only two songs you've ever heard from it were the title track and maybe "Love is a Stranger".

If you were really persistent, you may have heard their cover of Sam & Dave's "Wrap it Up".  A stellar cover at that.

While Stewart was seemingly the brains behind the voice,  Lennox had equal writing credit and a voice to back up everything she did.   Unfortunately, it was the MTV age and what she mostly got noticed for was her hair and androgynous look.

"The Walk," "Somebody Told Me," and "I Could Give You (A Mirror)" are really good tracks too.  Nothing where anyone stood up and took notice though.  The same could be said for most of the way Touch turned out.  Well, I think it is safe to say the way most of their albums turned out.  I mean, if you were a good fan, you got to know all the songs, but if you were reliant on MTV and radio, you heard maybe two songs per disk.  Maybe.

I know this has been remastered, but I don't have it, along with the additional material that Dave & Annie included.  It might be interesting though.  In my experience, normally if it was left off in the first place, it was for a good reason.
Posted by Blobby at 7:03 AM

I love Annie Lennox and in particular the Eurythmics. I remember seeing them live in the 80s... what's amazing is how their music still holds up today. I keep waiting for one of their songs to be covered by a leading artist from today.

I too am an Annie-Diva-Goddess minion.