We Can Work it Out

Let me just start out by saying, I totally see where Karen Carpenter was coming from.

First work dinner of this trip and I wanted to purge so badly.  Bulimia rules!!!!

Of course, I didn't. Or haven't.  But I feel so full and bloated it is quite disgusting.  I'd feel "better" about it if I had actually eaten a lot.  I stopped my dinner maybe a quarter of the way through it due to this feeling.

Denver is pretty though - what little I've seen of it.  The drive from the airport to downtown isn't much, but from the approach it looked cool.  It has been mostly hotels.  And then a walk to dinner down some district where there is only public transport or walking.  No cars.  See? 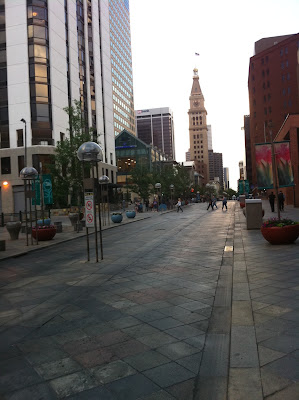 The walk back from the Chophouse (g-d, a chain.  Why not an independent?) was nice and necessary.  What little I walked did little to help me digest, but it was better than nothing.

...and if nothing else, I came upon a group exercise thingy all performed outdoors.  See? 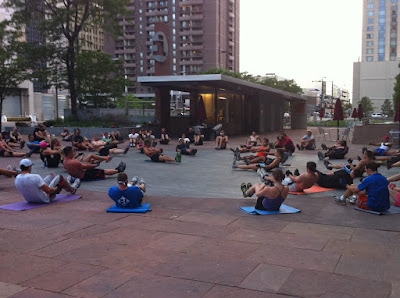 While I've always wanted to do yoga outdoors, I don't know I could participate in this.  First, it's all core, as far as I can tell - but the bigger deterrent is/was, each guy is in better shape and more attractive than the last.  I had to keep moving so none of my new co-workers pegged me for being that kind of homo.  I'm not sure what 'that kind' really means, but why get them asking questions when this was the first day I have met some of them?

Today is a full day of meetings.  Let's hope I'm feeling better as the day goes on.

Denver is all about public displays of physical activity.