Somebody Make Me Laugh

I don't follow stand-up comedians at all.  The early days of cable made them hard to avoid.  So many shows with a brick wall and a mic in front of it with bad or semi-bad comedians doing their two-drink minimum.

One of my favourite line exchanges from Family Guy is:  "How do we kill and hour?"  "We could watch Rita Rudner do a five minute routine...".   True that.

If I stumble upon it, Kathy Griffin has some good stand-up stuff.  I do notice the more she puts out, the less funny it/she is.  I always mute when she imitates her mother swearing, which she does at every special now, not because I'm offended by the words.  I'm offended because it's not funny.

Chris Rock I can take.  And dare I say, I love how wrong Lisa Lampanelli is.

Of course there is Tracy Morgan. I never found him that funny on SNL (but that's true of the majority of their players), and his role on 30 Rock is relegated to single minutes per show, so he's hardly the star of it.  After his little stand-up homophobic routine a few weeks ago, I'm not sure how much he'd be missed.

I struggle a bit with free speech and hate speech and where the line is in something like that.  Louis C.K., whom I mentioned for the first time, and until now - the only time, back in 2009 had some words of support for Morgan, or his ability to perform at least.

Louis, by all means, isn't a homophobe and actually has some funny bits on being gay (he's not) and on 'sucking a bag of dicks'.

Below is a typical quote, at least the delivery, on how he does his 'act', though I'm not sure how much of an act it is.  He seems to be like this most of the time. 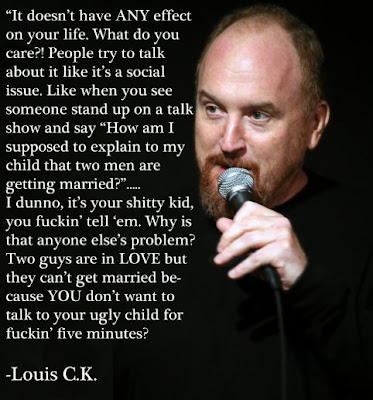 So, say what you will about Louis C.K. supporting Morgan to do what he does, he backs it up with his own stuff.  He supports the ability for the likes of what Morgan can say, not necessarily what he says.

I do find it interesting that in all the Morgan stories / comments, no one has brought up Michael Richards once, that I've seen, and his "jokes" on black people that were caught on video, that got him banished.  I'm sure there is a correlation there, but I have yet to see anyone tie it together.

I just don't get why Tracy Morgan has any kind of audience. I don't think I've ever laughed at anything of his, ever.

We enjoy a few comedians, like Jo Koy and Lisa Lampanelli. But Tracy Morgan? I never thought he was funny during his stint on SNL.

Ok, I'm really starting to get nervous here. It's almost 9:30 on Thursday evening and you haven't posted anything today. You have two and a half hours to come up with something. Come on Blobby, you can do it...