I gotta stop blogging so late at night - and drunk at that.   These work events wear me out.  It's hard for an old man to keep up - not that anyone here is much younger than I am.  Still, a lifetime of drinking has ironically taken its toll, instead of built up tolerance.   Who knew?

So last night (really still tonite, since I'm still up and typing this), we, as a team, went to the Rockies/Dodgers game.  I could not have cared less.  National League? pffffft.   Purple outfits?  They're not Prince.  Or even Appolonia.

And we had to sit in the 3rd deck with the 'common folk'.   I'm just joshing.  I had fun, but mostly because my man-date, Scott, was there and another great co-worker Sean, whom I absolutely adore. He's like Scott and myself, but younger and way cuter.

The game was a dud, until we were nearly out of the ballpark.  Rockies trailed by 4 runs and I just didn't really care.  Before we hit the mezzanine, the were tied.  By the time we passed the turnstiles they were ahead.

For some reason because they won, if I turn my ticket in at a Taco Bell between 2-4 pm, I get four free tacos.  No thanks.  "Make a Run for the Bathroom" should be their unofficial slogan.  (that's for you Torn!)

Still it was nice being in a ballpark I had not visited.  Checked-off at this point.  And they served Killians Red, so that beat the crappy beer of the named park - Coors Field.  Blech.  I'll bet Killians is a Coors product, but not that cheap taste....even if they still subscribe to homo-hate stuff.  What were my options?

So they had a cool field, no? 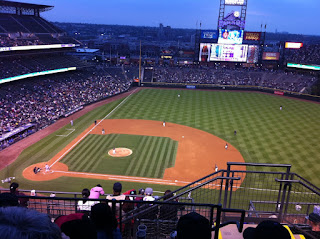 It looked nice from up in the nose-bleeds.

And then up even past us there was a row of purple seats, that circled all the way around the park.  It is the demarcation of the mile high point in what would have been Mile High Stadium, before corporate sponsorship took over.

I "made" Scott go up with me and take out pic there.  It took a few tries to get a purple seat in the snap. 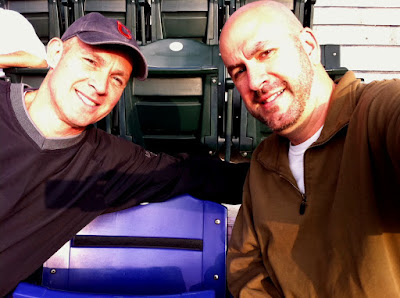 After that we hit a bar to watch LeBron & Co lose to Dallas.  I don't care for Dallas per se, but I like watching LeBron lose.  Douche.

So I'm done tomorrow at 12 noon and it's off to explore the city a bit.  I'm a tad bit excited.  Something new for me.  Work travel where I actually see the sites!

Your Appolonia reference totally made my week. Thank you.

denver is pretty neat, but you may be feeling the affects of the "mile high" altitude.

you will change your mind about a national league team when yours and mine meet for the world series this year - AND WE TAKE IT ALL!