It's the end of January (well, it was).  What would you do?   That's right, start a major bathroom renovation.

This has been a long time coming. It's been at least four years since I blogged about redoing our bath and the adjoining bedroom, which the previous owners made into a dressing room.

So, with our contractor selected, we are moving full steam ahead. We are doing both rooms and a little more - since the previous owners had the rooms cut up a bit. Basically three rooms will be going into two. We will keep the bedroom a dressing room, but configuring it as best we can that any future owners can convert back into another sleeping quarters.

In theory it was cruel to start this for the workers in dead of Winter, but you know something, yesterday they pretty much completed demolition and it was 50 degrees....and somewhat sunny.  I'm such a nice guy, I even told the contractor not to bring a porta-potty, that the workers could use our downstairs restroom.  Not only did I not want to pay for the port-o-let (yes, I'm cheap), and I didn't want it sitting in our driveway, but to send people out in January and February to use it?  That's just cruel. Or would be if it were our normal Winter weather.

Anyways, we have picked out our bathroom fixtures, our granite, our cabinet colour. This weekend we pick out tile and the next our lighting. Then we are done.  That last time we picked out tile we were almost done. Lord, that was a painful adventure.

Well, we are almost done - the workers are not.

Four days ago, we moved out of our bedroom and into a guest room. We are in the guest bathroom and our clothes are finding homes all around the house. I've come back commando from the gym because I forgot to find, let alone pack, underwear.

Three days ago they started demolition. 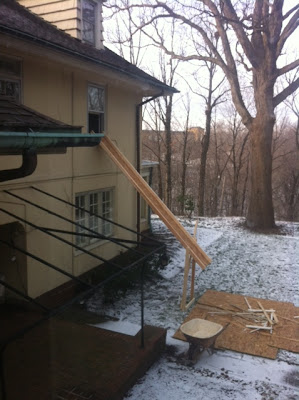 The chute from our bedroom to the yard. 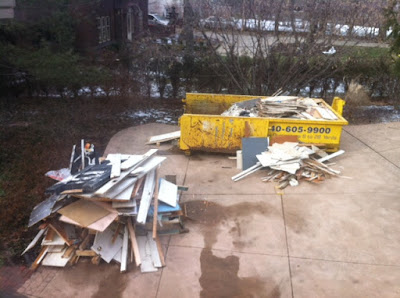 Two days ago they finished.

They filled that dumpster up in no time and left that pile in the drive for another day.  There was another pile the next day, all cement from the bathroom floor.

Plumbing, Heating and Electric guys are traipsing in and out now.

Yes, I'll post before and after pictures.  But not yet.

This would be all so much easier if we lived at our other residence while these things took place, of course, we've have to have another house. But we don't.  So for the next few weeks, we'll live in dust - which makes me crazy.

I'm sure it will all be fine when it's done.

Your chute must be getting a real workout!

Any hotties working there? Or just a bunch of sweaty fat guys showing off their crescent moons?

I think it's impossible to top Cubby's comment...so let me just say:

1. you have a dressing room?
2. it looks like you have a beautiful house (not that I'll ever be invited to visit)
3. ain't it sad to go commando and no one notices?
4. having just finished a bunch of house projects since we moved into the new condo, I assure you that it's all worth it. Maybe you'll even find a permanent home for your underwear.

One of these years we'll be finished with our bathroom remodel.... unless I die first.

I love all the comments above.
That is all.

I'm comfortable in the fact that IF I go commando, people notice. There.....ponder that the rest of your day, folks!

Your blogger buddies are a bunch of wicked old screws! I just hope your loo is done soon and fabulous!

I love remodeling houses because I get to throw my own personal touch on it. I love designing and accessorizing bathrooms, it's my favorite space in a house.