Wherever I Lay My Hat (that's my home)

The title image has been sitting in my folder of images I've wanted to use and not sure how to incorporate into a blog post.  I've held onto it for almost a year.

I am, by no means, thinking this is going to work.  There is just no easy way to slide in a Hitler reference.  It's even more difficult to do it with Charlie Chaplin.  Who knew?

Before Denton and I went to the movie, which I referenced yesterday, our friends, David & James invited us over to watch the Kentucky Derby.  {sigh}

I don't care all that much about the Derby.  It's hours of prep and excitement for something that's over in a minute and whoever finishes first wins.  In my book, that's called:  sex.

However, since I was picking David & James up for the movie and dinner, we would only be showing up about 15 minutes early to see the race.  I was actually fine with going.

As they escorted all the horsies out the gate, I took notice of their names and deemed that I would root for Pants on Fire.  Mucho Macho Man seemed too gay for me.   Yes - me!

But when David did ask if we would come over, I queried if we had to wear a hat.  His response was 'no'.  BUT - the second the receiver went cold, I had a scathingly brilliant idea.....as I am apt to do.  I got home, did a quick Gooooooogle search and then sent the image to the printer.

A few minutes with a pair of scissors and some tape and I was good to go.

Ruckiry (not Jon's boss), I had completed my task and attaching my creation to my head before getting out of the car, because David met us outside when we pulled up. 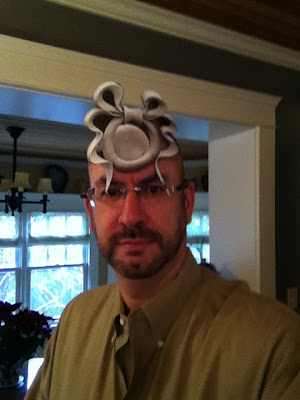 The poor man just busted a gut laughing with at me.   ...and yes, I wore it through the entire race and until we went back out to the car to head to the movie.  The plan was to wear it for the car ride to the movie and do the royal wave along the way, but the interior roof of the car kept getting in the way.  I have no idea how Princess....um....what's her name (the dour f'ugly one) stood her ride to and fro the royal wedding.

Much to everyone's disappointment, I had to take it off before we even got out of the driveway.


.....and that is how Hitler and Charlie Chaplin went to the Royal Wedding.    The End.

You made that yourself? You really have a hidden talent! I saw the pic and was immediately impressed that a bunch of Chinese slave children could be taught and then forced to make such an elaborate fascinator for the American comedy market, and here it wasn't the slaves at all.

Do you still have it? Put it on ebay. It could make you rich and you can live happily ever after :-)

Priceless!
This is why you are one my favorites in C-Town.
See we get it!
Now if I can find a venue for my new LargeTony T.

You are a genius. I thought it was Photoshopped.

I disturbed the nearby diners with my laughter when I read "that's called: sex."

bwhahahahahaha! it looks better on you than on those horse-face princesses. dare I say you look rather "fetching"?

"that's called: sex" - I gotta use that line someplace tomorrow!