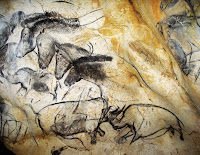 We are so on track to get to 12 movies in a year.  We've only ended the first week of May and we have just completed movie #4.

The Cave of Forgotten Dreams certainly interested me and it was interesting.  It just needed to be 30 minutes shorter than it was.

As with so many things, Terry Gross makes music, books and even movies sound better than they really are.  She has a gift.  And I have a gift of buying into it.   Actually,  I'm off the hook on this one - I didn't even hear this Fresh Air episode with the director, Werner Herzog, Denton did.

Clue #1 should have been that it was made by the History Channel.  What makes for a good 90 minute show with commercials does not necessarily make for a good movie.  A 3D one, at that.  Yes, 3D.

As we were going into the movie, I was exchanging texts with Becky.  Rude to do when out with your husband and two friends, but still.........    And it was funny.  Or at least I thought so. 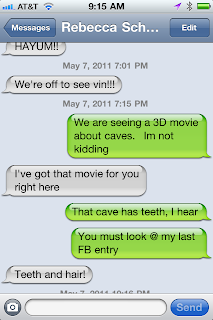 The 3D actually worked.  It provided some great shots of the cave, the artwork and some of the graphics (I was really into the laser scan of the entire cave). But man those 3D glasses are hard to wear over regular ones.  I'm just sayin'......


The subject matter was certainly intriguing and the shots were well done - that is, what shots you can get in a dark cave where you're not free to wonder off a two foot wide path. But the artwork itself was so cool. Paleolithic drawings of horses, bison, rhinos, cave bears and cave lions.  Rhinos in France.  Who knew?  Some of them had six or eight legs, depicting running animals.  And they were so well done - not crude drawings at all.  Actual art!

The Cave of Forgotten Dreams won't play in Cincinnati or to anyone who would go the the Creationism Museum since clearly this movie would be a piece of fiction.  Artwork from 32,000 years ago???   Get the fuck out!   People have only been on this planet for 6,000.

I'm not going to embed a video here of the trailer, but you can go to this link to watch, if you'd like.  ....and yes, the music you hear in the clip plays throughout the film.  It's more than a little distracting.  It's like Bjork, but without vocals.  You're supposed to like it and might even admit to liking it to seem cooler than you are, but not so deep down, you can't stand it.

The good news was, two of the three trailers looks promising.  One a documentary, one a new film by JJ Abrams - the mastermind who brought us Lost, Star Trek and Felicity.  Super 8 is directed by Abrams, but produced by Spielberg and has his hand prints all over it......good or bad.    ...but at least with two other potentials, it takes me closer to my goal of 12 movies for 2011.

(Sorry about my delayed comment on this blog - I've only just seen it.)
I agree absolutely with you about 'Cave'. Initially it was jaw-droppingly rivetting but after a while it started to pall. It could have been judiciously shortened by the 30 mins or so you suggest and been MORE effective. I actually left a few minutes before the end - just to catch an earlier train back home. But it was a clear case of 'less being more'.