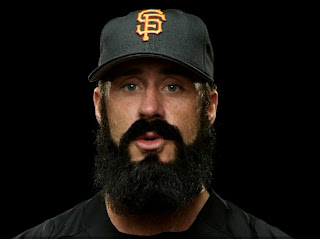 Ok, who doesn't not think Brian Wilson is hot?

No, not the fat, semi-deaf, loony from the Beach Boys.  You know the same guy who used his sperm to create two-thirds of Wilson Phillips.

I'm talking about Brian Wilson from the San Francisco Giants (that's baseball, Jon).  Mr. Wilson leads you to believe they are anything but 2010 World Champions.  Currently, they are not.

Granted Brian kind of looks like a younger Christopher Meloni (the Oz one, not the SUV one), but with a fake beard.  The only thing is, he's not and it's not fake.  Score!

....and he only looks good in the beard.  A quick Gooooogle search of him without facial hair renders him quite mundane.

Maybe I'm just a bit smitten, but I love his delivery on his MLB site.  Totally hot.

Touching his virtual beard doesn't do it for me.  I don't need to see badly acted woodland creatures living in that facial hair. It is just not funny or that creative.  But I will watch the intro a few dozen more times.

Song by:  the Barenaked Ladies
Posted by Blobby at 5:50 AM

Fidel Castro played for the Giants?

Yeah, the beard is glorious but the color is all wrong. It looks plastic. When are guys going to figure out that bad dye jobs just scream "insecurity?" Nothing is sexier than confidence. Got gray? Own it.

This guy is getting a lot of publicity because of the beard. It's weird though that his hair is brown while his beard is jet black. Does he color it? I always suspected is was one of those cheap fake beards you can buy at a gag-gift shop.


Personally, I’d prefer the fat, semi-deaf, loony musical genius from the Beach Boys. If I had to choose that is…

I second anonymous on both counts!

sorry, but this dude does nothing for me; but, to each his/her own.

Anne Marie do you have a blog because I am starting to think I should be reading it.

sorry, anonymous, but I do not. I do nothing interesting in life to warrant my posting some written vomit. nor do I have facebook, or twitter, or any of those other social media time-wasters.

my name appears in comments on several gay male blogs; blobby links to some of them. come and find me!

I understand Anne Marie. Quality has a quantity all its own and I enjoy your simple direct comments as much as any blog. It doesn’t require volume to make the world a better place.

As for social networking – you mean the comments section on Blobby’s Blog isn’t the new Facebook? Hmm – well that’s the last time I listen to the concierge at the adult book store!

But I’ll keep seeing ya around, as sure as my name is anonymous. ;)

dear anonymous: now you have me intrigued. care to discuss things outside of blobby's comments box? we could exchange e-mail addys...

do let me know!

It would be my pleasure Anne Marie. However since this is our only connection should I post my e-mail here? My anonymous persona would be exposed. (Robert probably knows who I am – but a shadow of a doubt makes life more interesting). Shall we arrange some sort of secret meeting place in a dark secluded corner of the internet to make an exchange? Or you could just post your e-mail here…:)

"Shall we arrange some sort of secret meeting place in a dark secluded corner of the internet to make an exchange?" - too drug dealer-like.

here are the clues

put "blobby's anonymous" in the subject line so I don't delete you as spam.

I look forward to hearing from you! :-)