Your Mother Should Know 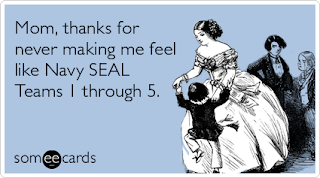 I love the cultural reference in the title image that will be totally forgotten for anyone who looks back through the archives a year from now.    ....maybe six months.  We, as a people, have a short memory.

But today is Mother's Day.  It kind of snuck up on me.  Isn't it normally later in May?

I'm covered.  My friend, Chef Bob, had deal on him preparing three meals for two for the week of Mother's Day.  It sounds lame, but I mostly got stuff my father would like to eat.  It is really just to make my mother's life more tolerable when it comes to meal planning.  So it's kind of for her too.

We're going over today. I'm not sure if I'm bringing food for everyone, or making it.  This is different than the Chef Bob food, by the way.  I guess I'll decide a few hours before I go out there.  Either way, we won't have to go out and she won't have to make anything.

Rebecca told me what she sees as a dirty little secret:  Mom's hate being taken out to dinner/breakfast/brunch on this day.  I'm sure she did a cross socio-economic/generation survey.  It's all valid.  I'm hoping she's right, because that's what I'm running with.

It's been a tough year for my mother and myself.  We still get along just fine, but I won't say our relationship hasn't been stressful this last year.  I have been tough on her regarding my dad's health and stuff, and things have been strained a bit.  But overall, we're good.

Hopefully she will like the meals, even though she said 'no presents'.  While a gift, it is a temporary one to make her life a little easier and won't be something she'll have to find a place for on a shelf or another item of clothing she'll never wear.

And hopefully, the rain will hold off so she can spend the day outdoors like she prefers.  ....and hopefully, her one and only son won't roll his eyes are her.   You know, it's the little things.

I NEVER go out to eat today; too much bullshit for my taste. I go the day before - fewer crowds and the people are more relaxed. I got my drink on yesterday at a local watering hole.

A couple of Moms I know would just appreciate time off.

I told my mom this joke and it to a second for her to get but then she had a great laugh! Thanks.