When You Were Young 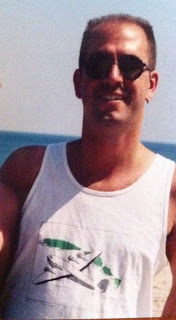 I'm traveling this week and know I won't have lots of times to craft real-time blog posts (though I do make time whenever possible).  So on the off-chance I don't have anything interesting to real time blog about or no time to do it, I am leaving you with something like this post.

I snagged it from Erik over at gambrinous with griffonage, and he snagged it from elsewhere.  It's a little meme, one for thought.  It reminds me when aged Stewie Griffin meets the young Stewie Pablo.    ....and they never did get an answer on if Ellen Cleghorne ever found a successful vehicle.

1. Depending on your age, go back 10, 15, 20, or even more years.
2. Tell us how many years back you have traveled and why.
3. Pretend you have met yourself during that era, and tell us where you are.
4. You only have one "date" with this former self.
5. Answer these questions.

Okay, as we start, what year is it and how old are you?
15 years ago this last December.  I had quit my job at The Ohio State University to move back to Cleveland with Denton (who was not from Cleveland, but had just taken a job there).  I was 32.

1. Would your younger self recognize you when you first meet?
I would think so.  I mean, I had more hair then but was clearly losing it.  I was thinner, but I think young me would recognize the now me.

2. Would your younger self be surprised to discover what you are doing job wise?
Absolutely. As I left that OSU job, I was making the most I had ever made:  $24,000 a year, gross.  ...and I'm rounding up.  Not that it's all about money.  But while working for one of the largest universities in the country, we would joke about not working in the 'real world' and how we'd never do it.

I now work for a huge corporate entity with my job doing an aspect of 'sales'.  That was so not my thing.  It probably still isn't, but younger me would be going "whaaaaaaaaaaaaaat?????'

3. What piece of fashion advice would you give your younger self?
Stop buying your ties at Kohls. They are floral print and not all that attractive. Save up and buy some decent ties that you'll be able to wear for a long time that are stylish.  Stop buying shirts you think that will be a stand-out in a gay bar - you won't be going there forever (or much longer) and you're only wearing them one or two times anyway......and no one cares about what you're wearing anyways.

4. What do you think your younger self is most going to want to know?
Am I  (Will he be) happy?

5. How would you answer your younger self's question?
Yes.  While work can be a drag, overall you have great friends, a nice house (he never thought home ownership would be in the cards), a loving partner and animals who you adore.  Your family can be frustrating, but they always were - and you're in pretty good health.

6. What would probably be the best thing to tell your younger self?
Seinfeld was wrong.  You can make friends after 30.  While the core of my friendships are 20+ years old and going strong, that he/I have a really good group of newer friends - gay and straight.  And that those relationships all need to be nurtured.

7. What is something that you probably wouldn't tell your younger self?
I wouldn't tell him about how big the political divide has become.  Why bum him/myself out too far in advance?

8. What do you think will most surprise your younger self about you?
That I'm healthy and workout most days.  Younger self bought into that in theory, but the most exercise he ever did was some bike riding, but mostly 12oz wrist curls.

9. What do you think will least surprise your younger self?
That time has not tamed a wicked tongue or dulled my sense of humour.  And that I still say 'fuck' a fuck of a lot.

10. At this point in your life, would your younger self like to run into "you" from the future?
I would like to think he would.  He might be taken aback on how settled down I've become, but in reality it is what he/I wanted but wasn't sure if we would be living fast and dying young, so put no time into thinking much about the future. But secretly, he'd want to know where he was and that things were good.

Isn't it great to be happily surprised at how well life is going? I never thought I'd be where I am today and I can't wait to see what comes next. I am so glad you are a part of it.

BTW, for future reference your call sign is Goose.

That is a splendid MEME.
I enjoyed reading your answers; they were thought-provoking and I learned something about you.
I think I will try this one someday.

Cool meme. I'll have to date mine pre serge. My life turned out nothing like I'd imagined. And that's a good thing.