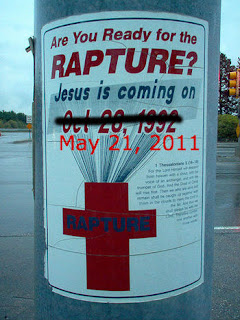 Of course, Manson thought he and his Family were in that cohort - and he was starting the end of the world with the Tate-LaBianca murders.......so there's that!

So, the rest of us not in that 144k, have ascended to big puffy clouds in the sky and learning how to use our harps.  And finally we have our those flying machines that have been promised to us for the last few decades.  Granted those flying machines are now "wings", not turbo jetpacks.   Blast!

Anyways, there is a group (or there are groups) out there saying that today is the day.  Judgment Day.  Cue the evil music.  duh-duh-duhhhhhhhhhhhhhh.

I'm not that worked up about it.

First off, I don't believe it.   Secondly, if it were to happen, there's not much I can do about it.   Thirdly, I'm most likely not in the group left behind or going to the pearly gates.  If Hell exists, I'll be in the VIP section - with velvet ropes and a posse.

But to be fair, I don't believe in Hell.  The only reason I want to believe in Heaven is because that is where good kitties go after they die and hop cloud to cloud.  I can frolic with Kylie and Tovah.

With these groups, logic is not a factor.  It doesn't matter that a dozen of these dates have come and gone without eternal salvation damnation.  They live in their own world - well, kind of - and will come up with some reasoning that the liberal media is to blame for misinterpreting "the facts".

But we are judged, so be it.  They might have a few surprises coming their way.  Quite a few.  Not the good kind.   And if we be judged - and I'm a gay man, we judge all the time, so I'm used to it - it's not the end of the world.

Nope, that happens on October 21, 2011.  Apparently we have five months of torture between Judgment Day and my post that will clearly be titled after an R.E.M. song.

Yes, five months of torture.  Because that is what Jesus would do.

Do yourself a favour and rent the movie, The Rapture with the first ex-Mrs. Tom Cruise, Mimi Rogers, and Special Agent Mulder.  It was at least interesting while still being 100% as fictitious as this load of crap that multi-evangelical groups are pushing.

....and if I'm wrong with this, you'll never know it because you'll be dead or taken.  Or like me:  left behind.   Take that, Kirk Cameron!

Remember....misery/suffering loves company...so we're all in this together!!!

Hell is other people (at breakfast)

You know what they say, “When God closes a mind he opens a window”.

You know they're blaming gays for speeding up the date, don't you? Seems to me they should be thanking you; after all, they get the prize. I'm intrigued at what their response will be at 6:01 PM.

"christians" (and I use that term loosely) are the biggest bunch o' douchebags out there!

I want to go to wherever it is with kitties (my sydney and kelly!) and doggies and all my like-minded friends. there will be free-flowing booze and dancing and singing and everyone will look FABULOUS!

and we will be having all the fun and the "christians" can only stand at the velvet ropes and watch.

Read up sometimes on the history of end of the world predictions. It is an amazing tale; alas it never seems to stop or vary.