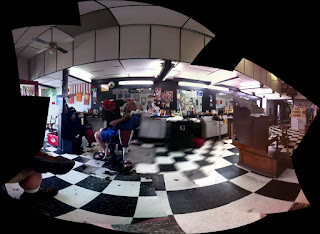 We've been in Columbus for the long weekend, hanging with my peeps. I flew directly there from my work week and Denton drove in to  meet me.  Rebecca and Dith were waiting for me in the airport.  We never even made it out of there without having a beer.

That is the way a weekend should work.

I will write more about the weekend as it wraps up, but while we were down here, I needed to get my hairs cut. It had been six days!! SIX DAYS!!!!  I was like frickin' Pippi Longstocking. You know I normally buzz my head two to three times per week.  Or did.

But yesterday I went for it.  I've been so close anyways but I went for broke.  ...and I like it.

While walking with the gang to a farmer's market and across the street was a good old-time barber shop.  I made a break for it, avec Denton,  I mean, I needed someone to take pics as I opted to actually shave my head.  Or have it shaved.

I paid someone to "cut" my hair.  I haven't been in a barber since maybe 1998.  Probably 1997.  It was a weird experience to be in such an establishment, and to have to dole out cash for someone to do what I normally at no cost.

There was slight disappointment.  I went over the bumps on my head with the barber, which you're all familiar with. No worries, he did not hurt me that way. And then I forgot to mention that I had a sunburn on my head. I realized that on like the their pass of the head with a razor.

I was most bummed about no straight razor.  I assumed that is the implement that would be used to make me a chrome(r) dome.  Morty told me it probably wouldn't be that they don't seem to use them.  Becky confirmed this.  How they are the go-to source for barbers and razors is beyond me, but that is the beauty of them.

True to their word, Mike, the doer of the deed, pulled out a frickin Bic, single blade, disposable razor.  I user nicer razors to shave my shoulders!   ummmm....forget you heard that last part.

Mike slathered up my head with shaving cream and then putting steel to skin, like such. 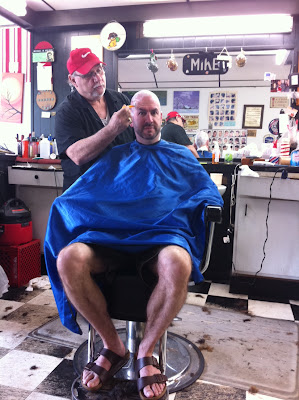 Unlike others have said, I don't think I'm showing you a beaver shot.  And unlike my cousin commented, the carpets do not match the drapes.  I'm still native - down there.

But in a matter of minutes, the task was complete - and unlike that snotty 2 year old before me, I didn't get a lollipop.  I did though immediately text David G, who has been smooth up there for years, and I got a two word reply:  'bout time'.   Nice.

For what little hair I had to start atop, and what little was taken off, it felt completely different.  The way the sun and wind felt, but mostly to the touch.

Sure it all felt smooth, but there was a feeling to the skin I hadn't experienced before and the best I can describe it is like taut playdough.  I made everyone feel my head.  I don't think they were as enthralled as I was. 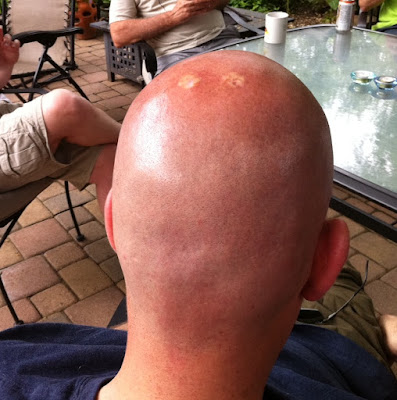 Yes, you can easily see my bumps, my bumps, my lovely manly bumps.  You probably always could, but not there is no cover for them at all. 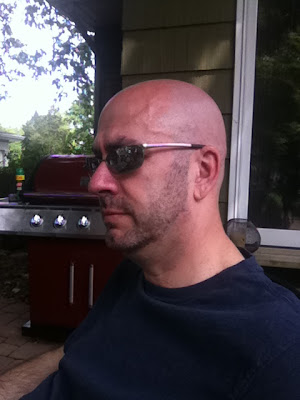 Then there is this shot.  Because I'm so manly.

So now it is time for me to go do the shave myself.  We'll see how that goes.  While out to lunch yesterday with the gang, I did stop in Aveda to buy some manly shave cream - if you can use 'Aveda' and 'manly' in the same sentence.  Because I might be a butcher looking fag, but make no mistake about it, I'm still a fag.  I never really have a need for "product", but now I do.

Song by:  Santana featuring Rob Thomas
Posted by Blobby at 8:41 AM

What is that all over the floor around the Barber's chair? Ewww! Doesn't that man clean between victims?

Have a great weekend Blobby :-)

The shaved head looks great on you!

Did you ask him to do your toes? Because you remember what the quote of the weekend was!!!

the head shot is...interesting. may take some getting used to on my part. but whatever floats your boat!

I recommend using a Mach 3 turbo or Fusion razor, and, if you can find it up there in Cleveland, a product called Head Slick for shaving cream. (Walgreens sells it down here in Columbus.) It's sold by Head Blade.

( I didn't much care for the razor set up they sell, but the Head Slick shaving cream is awesome)

My guy uses a straight edge. It`s my favorite part of the experience. He uses it at the end to do the neck and sideburns. I like the beaver shot.

I am quite fond of Aveda's Mens line. The shaving cream works well.

Just don't say you "spramp" yourself with Aveda "product".