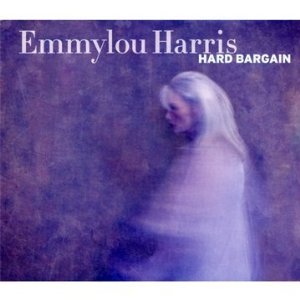 It seems I'm on a roll with more bluegrass, country and/or Americana music lately.  This month's selection is no different.

Emmylou Harris has a voice unlike no other.  I don't even think that is open to debate.  Like it or hate it, she sings like no one else and it has been this way for what, 35-40 years?  Personally, I love her voice.

Normally, I like Harris as a music interpreter as opposed to doing her own material, but now and again she shines in this aspect.   With Hard Bargain, she succeeds and fails depending on the track.  While it has gotten stellar reviews, I find it a bit uneven myself.

There are great great songs, like "The Road" (a tribute to her mentor, Gram Parsons), the gritty and fun "Six White Cadillacs" (though the iTune video version is even better!), the title track, "Goodnight Old World" and "Cross Yourself".

I know I should like "Darlin' Kate", but it is just ok. Same with "My Name is Emmett Till".  But I find them to be just fair and I'm left wanting more.  I'm all for Harris' dog rescue program, but "Big Black Dog" just does not fit here.

I am impressed that the disk is just Harris and two other musicians.  I think that takes great talent to do this.  I might have liked to hear Anna McGarrigale's backing vocals, but Harris took those out and sang her own harmonies.  Still, it sounds good.

Harris has done more with her own work (Stumble into Grace, Red Dirt Girl), so I expected and wanted more from this disk.  Don't get me wrong, it's good - better than most anything released this year, but I still expected and wanted better.
Posted by Blobby at 6:45 AM

Love her voice as well amd her songs.

ELH has been a favorite of mine for many years. I didn't know about this album, though (I'm kinda out of the mainstream these days). I have fond memories of seeing Emmy-Lou and Linda Ronstadt at the Warfield in San Francisco a number of years back. Great duo. And the McGarrigles, too. Saw them many, many times at the Great American Music Hall. Was very saddened when Kate passed on. I'm going to look for this album now. Thanks!