When the Body Speaks 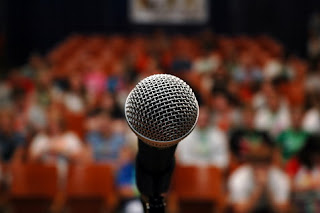 Some says death is preferable to public speaking.  I won't go that far, though I can't say I'm a huge fan of the event.

I did some when working at Ohio State.  I was horrible.

I did some when working in a hospital - to groups of a few hundred at a time.  The first time S-U-C-K-E-D.  But it was a series of talks that I did about 10 times and by round number three I was pretty comfortable with myself and the material.   I did ok.

It really comes down to the material and not as much the audience. If you know your shizz, it's not all that bad.  But that's just the fear part.

I'm not a good public speaker for a number of reasons:  I say "um" too often at pauses.  I rush my words (probably nerves), I feel that I speak in a monotone fashion.  I shift weight from foot to foot.  I fidget with my hands.

All distracting to your audience.

So when I was in Chicago this last week, one full day was spent with small groups of 4-5 learning tricks to being better at public speaking.  It wasn't toastmasters or anything, but I have to say it was very helpful.

We had a supportive group, so when we had to get up and talk or do vocal exercises that make one look like an ass, no one even chuckled at the other.

Oh, and all of our 6-7 presentations were videotaped and played back for review.....and critique.   Yikes.  ....and they'll be put on a portal so we can review our own tapes (and only our own).  I don't know I'll go back to visit that site.

I'm not ready to present at any Zig Zigler or Tony Robbins forums, but getting up in front of a board of directors, I think I'm good.

In the bar, after training was done, one of my peers mentioned, "isn't it odd, when we're talking like this we don't say "umm" or have those pauses?"   It never occurred to me before.

When we had to do the vocal exercises, the instructor asked if we had seen the King's Speech.  I don't think he appreciated me asking if we'd do the one where Colin Firth says "fuck fuck fuck fuck fuck" over and over again.   Everyone else laughed.

The last day of my time in Chicago, I had to give a 45 minute presentation, for which I had less than two hours to prepare.  ...and this is after the instructor saying, for every minute you present, you need an hour of prep time.  HA!   ...and he wasn't even talking about writing the presentation, he meant practicing it.

Those training sessions with critiques would be invaluable to just about everyone! I'd love to participate in a session like that. Excellent!

I went from being painfully, horribly shy in my early 20s, to now where I speak to groups every day with complete confidence. The largest group I addressed was over 1000 people which, to me, was just another day at the office.

In any public speaking, I think it is essential that (1) you know your subject matter exceedingly well and (2) you 'speak from the heart'... that you actually believe in what you are saying.

Practice, practice, practice. It also helps if you have something to say and a passion for it. (Sometimes the passion is a paycheck.) My heart races every time I get up to speak, but I use the adrenaline to energize my talk. Then I collapse when it's over.

What the hell? Are you becoming a politician?

I guess I'm lucky that public speaking doesn't bother me very much.

It USED to... when I was painfully shy. But now I sort of relish being in the spotlight.

For me, the key is engaging the audience and getting them to laugh a bit. Once I'm able to do that, I get much more comfortable up there.