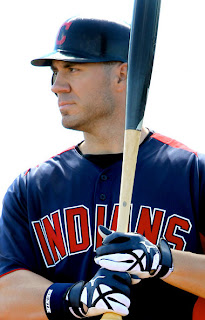 Last night was my first Indians game of the season.  Right on time, actually.  While a great reason to post, I also rarely would pass up an opportunity to post a pic of my would-be {please, believe me Santa, please} second husband, Travis Hafner.

It is sad, but until mid-May, the weather here is iffy.  And by "iffy", I mean too cold to sit through an evening game without bundling up, which is not what baseball is about (to me) unless it's the home opener or post-season play.   I've been to games where they've run out of coffee and hot chocolate by the third inning, it's that cold.

We had great tickets and it was a great night.  I haven't seen a crowd like this at an Tribe game since 1998.  8000 tickets were sold by people walking up to the box office before the game.

Last year we started in last place and save two or three days of the entire season stayed there. This is not the case this year.   We are number one.  And save a few days right at the beginning of the season, we have been number one.  It's a nice feeling to have.  As percentages go, for either National or American leagues, we have the second highest. We'd have the best if it were not for our two losses to Tampa earlier this week.  Painful losses at that.

Yesterday could have been more of the same.  We were up by two, then down by two.  And still down by two as we went into the bottom of the ninth.  It sounds oh so very cliche, doesn't it?  But then we were down only by one.

....and then Mr. Hafner came to the plate.....much like Mighty Casey.   And I think we all know how that turned out - right?  Well this story had a different ending.  The Pronk had been having a bad night of strike-outs and hitting the ball right to the first baseman.  He did get on base once.  But he's been having problems all year with injuries.  The last two or three years, actually.  But I love that we have retained him.

Indians had one person on and Travis hit it over and out of center field.  I think my hands still sting from all the clapping during the 9th.  It was GREAT. 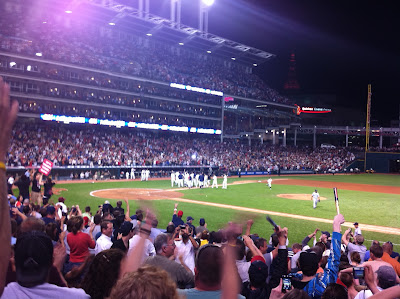 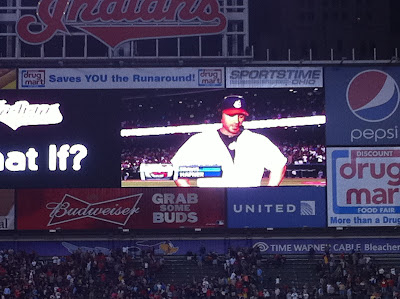 The closest I got to Travis - mostly due to that restraining order. 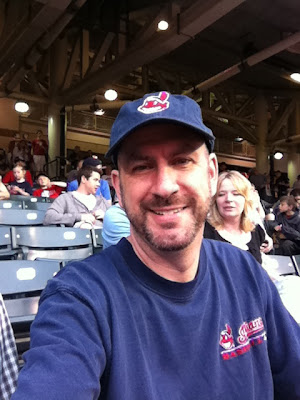 Your host.  Man, I need to have something done about my eyes.  Anyone know a good plastic surgeon? 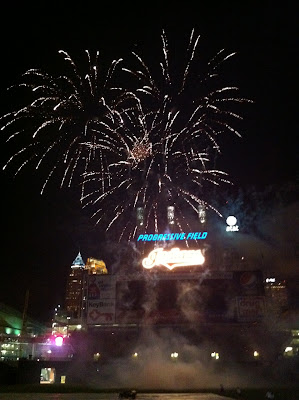 Every Friday home game, there is a fireworks display.  As good as most 4th of July ones and without having to hear Lee Greenwood. 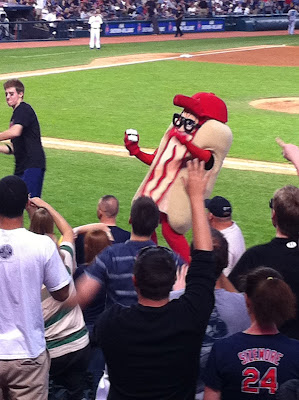 There is a hot dog derby around the 5th inning where Ketchup, Mustard and Onion race around the field.  Denton so nicely pointed out to me that Ketchup has my glasses.  The man had better be careful - the guy I'd divorce him for was sitting a few hundred feet away from me in the dugout.

Wow look at you, Mr. Fan. With a smile even!

You don't need a plastic surgeon.... you look great!! I'm about the same age as you and my face looks like the wreck of the hesperus.

Ya know if you look at the picture of Travis at the top of your blog and then look at the pic of you in your “about me” profile. You could be brothers (or maybe it’s just the same pose?). And personally I think you look much more distinguished than he does.

your team and mine, mano y mano, in october; care to wager a bet?

you look perfectly FABULOUS and you know it!

nice to see the top of terminal tower thru the fireworks; and I agree completely about lee greenwood (fucking little suck-up sap!).

LOL I was also going to point out the similarity b/w you and your 2nd hubs!! LOL!

I agree with Buddy Bear; you look great.
You don't need a surgeon, you need a smooch.