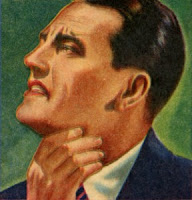 Yesterday, I woke up and had a sore throat.  It wasn't horrific and figured it was due to me doing mouth breathing at night and taking in a lot of dry air.

But as my gym routine went on and then work at home, I knew it wasn't right. That pre-thought of pain would have passed by then.  By noon I couldn't swallow my own saliva without massive pain. And then I started to get an all to familiar pain creeping up into my ears.  I'd been there before - 15 years ago, but the pain was as familiar as if it happened just last week.

Shortly after we moved back to Cleveland, I had a similar pain. I went to many a doctor who misdiagnosed me.  Mind you, I worked at one of the best healthcare institutions in the world, and these schmucks couldn't get it right - save one.  That doctor didn't even exam me before he figured out what was wrong - all by reading my chart.  Shocking.

He had it right with a problem with my Eustachian tubes. He gave me one more course of antibiotics and if those didn't work, he would aspirate my eardrums.  YIKES.    But they worked.

A year or so later, I had a similar issue and the eardrums self-aspirated on the landing in Key West.  The pressure ruptured my eardrums and for most of the vacation I couldn't hear much of anything.  It was problematic to ride around on scooters and I spent more than one day at the doctor's office there.

Yesterday, I didn't fool around.  As soon as I recognized the pain, I went to a retail clinic.  So much cheaper than an urgent care or a doctor's office.  But there are trade-offs.  It is walk-in only and there is only so much they can do.  I figured sinus/ear/throat infection would be one of those things.

Now I work in healthcare so I don't tolerate fools gladly when it comes to this.  The Nurse Practitioner was ok, but that's it.  She was convinced it was Strep. I knew it wouldn't be - and it wasn't.  After that she didn't know what to think, even though I told her my history.  The electronic medical record didn't give her decision criteria for Eustachian tubes.   How about your umpteen years of education, honey?

She reluctantly gave me a script for an antibiotic, which I promised not to fill for a few days to see how things progressed.  She gave me treatment options for a saline rinse with a neti pot like device.  But I fly on Monday morning and there is no way I'm going to blow out my eardrums again - let alone sob like a baby upon decent.

If things don't feel better by tomorrow evening - or at least on their way - that script is going to the pharmacy.  I don't see I have a choice.

Song by: Brandon Flowers
Posted by Blobby at 6:48 AM

One good thing about living in this town, is we become excellent consumers of healthcare and legal advice.
That being said,take the antibiotics and when you have the time discover the warning signs of an onset.
Take good care.

I need to clean out my gutters.

You know your history better than anyone. Take the meds.

I really hope you are feeling better soon. Good for you being proactive in this situation!

Pay no attention to doctors.

I hate it when medical 'professionals' don't listen to what the patient is telling them.

In my considerable experience, the mediocre ones are the worst at listening. The top notch ones listen and take your remarks seriously.