My travel luck is getting only slightly better.  I mean, how could it not?

Yes, I know you all stay up nights worrying about if I've gotten to my destination or if I've been cancelled or just delayed.  I appreciate the thought.  Don't worry your pretty little heads.

I don't know why 12 of 12 doesn't come on one of my busy busy travel days.  I wouldn't really have time to post, but I've been taking iPhone pictures like a mad man the last few days.

As mentioned, I am out west doing a tour with my new boss.  It's always iffy when you travel with someone new, let alone who is your boss, but so far so good.  And the reality is, most of the time this will never happen again and I'll be on my own, but we have spent a LOT of time together over the last few days.  ...a d he likes to drink, so there's that!

Even day one:  our flight from Boise was cancelled and we needed a way to get to Fresno.  Only one option was open for us to fly out of ID, to get remotely where we needed - jet to San Francisco and drive three hours.  Just what I wanted, considering I had already been in Cleveland, Detroit, Salt Lake City and Boise just that day alone.  Even going to Fresno by flight had us doubling back through Denver.  I was resigned to it, since it got me that much closer to Gold status.  I've said it before, it's all about the miles.

But since I'm traveling all day today (could not get a red-eye home), so I'm out the door at 04:30 to catch a flight back to Ohio - with multiple legs (yes, Gold, here I come!).  Feel free to click on the images to make them bigger and possibly better. 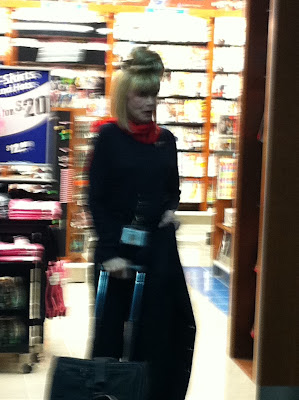 Yes folks, it's Patsy Stone, flight attendant. No Eddy or Saffie in sight.  Though my friend Stuart thought it looked more like Barbara Eden. 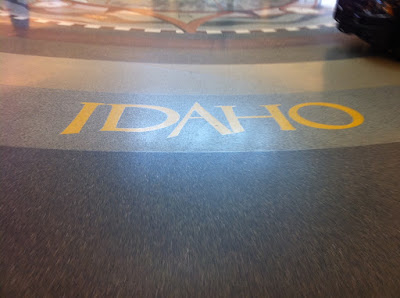 I can check Idaho off the list of states I've never been to.  I spent four hours at a client site and then a few extra trying to find a flight out of there.  I never left the airport in Salt Lake City, but I'm knocking Utah off that states list too.  You can get a ruling on that if you'd like, but I need any appeal to this ruling notarized by the commissioner for it to count. 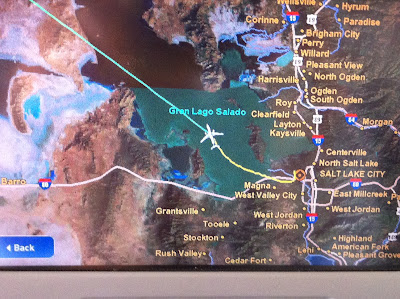 I love playing with the in-flight shit like the maps of where you are in your flight.  En español. I do not believe the plane is to scale. It's not an Airbus 360. 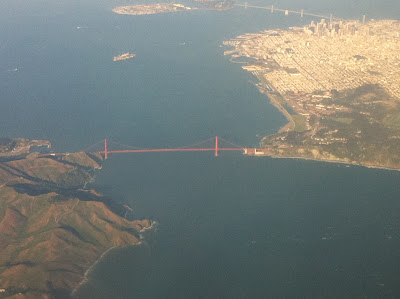 Per usual, I totally ignored the turning off electronics under 10,000 feet.  No one died.  I just took a bunch of decent pics from seat 7A of San Fran and the Bay Area. 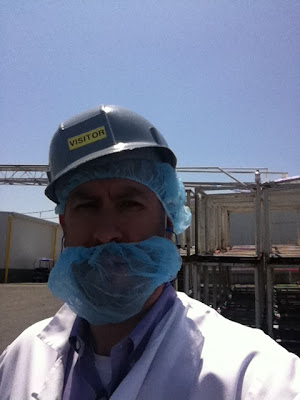 I don't think anyone would argue that this is one of the better pictures I've ever taken....save for the cap that is askew.  I might be smiling.  I might not be.  You can't prove a fuckin' thing.   ...and yes, I am wearing a beard net. 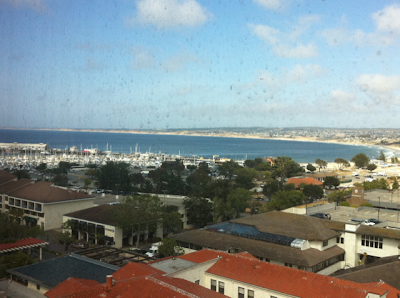 But things were better when we made it to Monterey. A lovely city that Denton and I had visited back in 1994 (!!!) and I honestly don't remember much other than an encounter in a sports bar, ironically enough in the same hotel I stayed this time.  But from the dirty 9th floor window, I still got one of the nicer views I've had on a work trip.

And for the nicest day - yesterday - using my App of the Month, Photosynth, I took a panoramic shot of the 18th hole at Pebble Beach, where I had lunch with my boss.  I did take a 360 shot, but can't figure out to pull it off the phone and/or app.  Anyone?  Anyone?

I also got my dad a golf shirt there for Father's Day. sssshhhh.  Don't tell him.

Song by:  Emmylou Harris
Posted by Blobby at 6:44 AM

SF is such a wonderful town. Now I'm going to be thinking about it all day. That sure is a great shot you took from the plane. Will you show us your other shots? Are you on Flickr or anything?

SF, Monterey, Pebble Beach (probably Carmel by the sea as well). If you ask me your territory has improved - California suits you. Great pics as usual.

I have not been to SF and monterey in a VERY long time. great pix though!

have a good holiday, blobby and denton! GO PHILLIES!

confidential to anonymous - see the previous blog entry wherein I answered your query.

We had an ancient flight attendant on our little propeller plane out of Burlington. She had a thick New York accent and was all gruff and stuff. I loved it. How come your iphone pics don't suck like Serge's?

I have never seen a beard net before!
I concur this is one of your more memorable photographs.