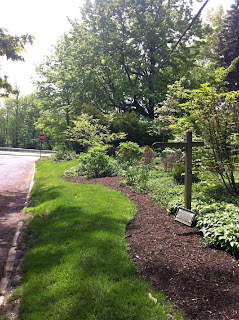 My lord it's been a wet year.   I think last week the paper said it has been the wettest year in the last 110.  I am now not sure if that means comparing year-to-date, or that we've already exceeded precipitation rates for the entire year.   Neither would surprise me.

Saturday was the first day in weeks I had an opportunity to cut the lawn - and even then, it was on the highest setting for the wheels because there was no way that the mower would get through it any other way.  Even at that setting, it still had to go through the mud and the muck.  And yes, it had to get through it.  I would have called in a professional service to cut the lawn if it went on another day or two.

And due to the inclement weather, we didn't get to work on our hillside before it greened in.   Normally we tackle about 25' of it, and think out the weed trees and such.  After it's greened in, you need pith helmets and machetes.  I guess we'll do it in Autumn.

I will say, the rain has made everything very very green, so at least it looks nice.  See?

While we do the landscaping for us, it's nice to get some positive feedback from the neighbors.  Many have told us that they like what we've done.  As we were taking out a bush last weekend, one stopped by in her car saying that in the 30 years she's lived here, the yard and corner have never looked this nice.

That was cool to hear. 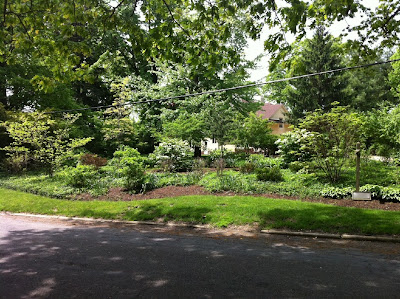 Here's just one more shot of the front, street view. There still need to be more done by the house, but not this year.  We also have to replace a few azaleas that didn't make it from last summer's scorcher of a summer - before we put in the sprinkler system.  But udder than that - it's lookin' good.

Email ThisBlogThis!Share to TwitterShare to FacebookShare to Pinterest
Labels: Yard

Man oh man, that's a LOT LOT LOT of green. Which, by the way, is my favorite color...

Pretty. I'm assuming this isn't the area that gets mowed over by errant autos?