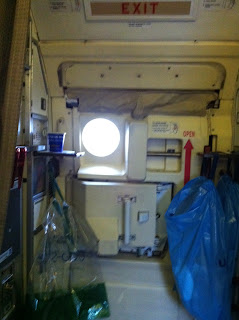 Lately, even for me, air travel has become horrible.

I know I tell you my tales here and many of you non-work travel folks cringe at my stories.  I'd say my travel on Monday was a total waste of time, but then a friend I had dinner with would get bent out of shape.

For work purposes, it was a waste of time.  Kind of.

It started with me getting to the airport around 06:00.  Not bad.  Behind me in the security line was a friend of mine, John.  We had worked together many a-year ago.  I'm working on my Gold elite status, but I'm not there yet.  John actually travels more than I do and probably has Platinum.  Anyhoo...he asked me to join him in the President's Club.  I sheepishly had to say I could not get in due to my lowly Silver status.  Oh the shame.

He had enough clout to get me in the door and we sat and chatted. He had coffee and such, but since I don't drink it, I was only there to catch up with him.  It was nice.   I left and went to my gate.

As I approached it, my phone went off with an automated notification of a delayed flight.  FUCK.

As it was, my flight was landing with not much buffer time to get me to my meeting in a timely manner.  Before you all scoff, there were no earlier flights and I wasn't giving up my Sunday to fly up there anyways.  Vague excuses of weather or air traffic clogging were given - depending on who was giving up the lame reason of the hour.   The 30 minute delay turned to 90 minutes.  Unfortunately, that last 60 was after we were on the runway - no way get off the plane.  I was ready to grab two beers and deploy the shoot for escape.

Mentally, I made the best of it and emailed (ooh, I know, my electronic devices were on!) some attendees that I would be about 30 minutes late.

That 30 minutes would turn into 120 after I landed, finally got my rental and then promptly got stuck on 476-N in what was a parking lot.  I went 4 miles in an hour.   And if you have never been on Pennsylvania's turnpike, there is a six foot wall between directions, there is no crossing over and going back.

Thank g-d for GPS, because when I did get off at the next exit, I had to majorly recalculate routes.  I went through some beautiful country that even at 25-35 mph, seemed like I was driving the Autobahn.

I love that the client was nice about it all.  I missed two hours of the three hour meeting.  I at least broke the ice when I came in and said, "ok, let's start from the beginning.....".

Then I just turned around and went back to my hotel near Philly.  King of Prussia, actually.  There was not a hotel to be had 20 miles from downtown.  No idea what was going on, but some big convention, I guess.   Or huge bed bug break out.  Either or.

But I did get to have dinner with my friend Sal. 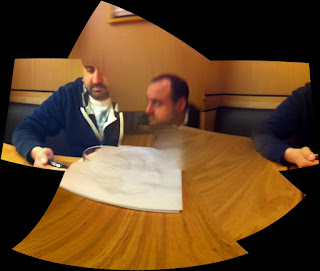 So with what little I accomplished business-wise, I got to spend a few hours and have a drink (yes, only one!) and meal.  We had a bunch of laughs and some good stories.  Most work travel stuff has you eating alone and being alone.  It is nice to have brief respite from air-car-hotel life.

Song by:  the Court Yard Hounds
Posted by Blobby at 6:33 AM

Wow...all those travel headaches would do me in. I'm not nearly patient enough to deal with it.

perhaps next time, you contact me before you come into town and I will buy you a drink.

Your "let's start from the beginning" quip was great. I'm still chuckling.

Yes, work travel sucks. Been there, done that. Ugh.

And why is my word verification longer than my comment?

But at least you've got the Court Yard Hounds to sing to you. :)

You have not been lucky lately. I hope to avoid snafus on our little NYC junket this weekend.