the Queen is Dead 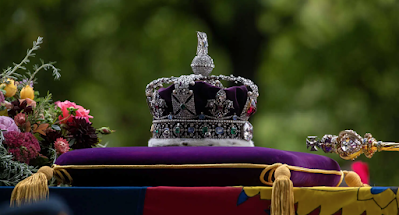 Yup, EIIR is still dead.  ....and now buried.  Well kind of.
I guess she's in a place, but not the final place. I mean, it's not like they didn't have 96 years to figure out the deets.
Measure twice. Dig once. I think that's the rule of thumb.
That said, I saw none of the pomp and circumcision (not a typo). I didn't need to or care to. Last I looked, we aren't one of the UK's colonies anymore, and while I'm sure she was a fine woman, I just. don't. care.
The few things I read about days ago only consisted of what Megan Markle was or wasn't doing right. It was all very Mean Girls. Why should royals be any less petty and controlling than anyone else?
I think everyone is just mad because Prince Harry is banging her and not them. Come to think of it, I'm a little peeve about that as well.  I can't recall ever having "had" a ginger.
I'll give it to the Naval Guard (or whatever they're called).  Can you imagine the crapping of the pants that would have happened should they have shifted and the crown and scepter when crashing to the ground?
At least I'd have paid to see that.
Song by: the Smith
Posted by Blobby at 12:07 AM

Watching the entire thing (well, being a Brit and all that - even if not an ardent Royalist!) I was especially nervous when those eight pall-bearers with coffin on their shoulders, had to negotiate climbing up and down steps. If just one of them had tripped the result could have been unimaginably horrific. Much relief that nothing so untoward happened.

There is a false top with. Built in clips for the scepter the orb and the Crown so nothing comes crashing down. She was buried, with
Her husband , parents , and cremated sister in a special annex last night. It has been a very long mourning period.

JDW - Members of the 'Royal family' themselves still have an additional week of mourning to 'endure', though I've little doubt that they're okay with that.

I saw where Charles 3rd had decreed five additional days of mourning, somehow I don’t think the repercussions are something she ever imagined . I’m truly sorry Raybeard it’s a depressing time , I can’t imagine what you are going through.

Oh, I haven't been dwelling on it, JDW - or were you being facetious, as I suspect?