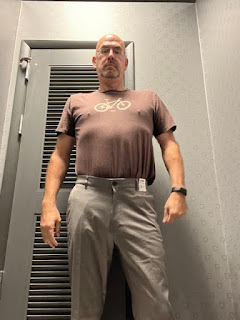 I went quasi-annual clothes shopping over the weekend.
FAIL.
I'll back up a bit. I don't know what gays like to go shopping, I don't know any of them. I know some exist for the love of 'retail', but g-d help me, I think I'd rather have a cavity drilled without novocaine than go to stores, try on clothes and purchase them.
Such as it is, I go only when absolutely necessary. Or every other year - whichever comes first. And even then.........even though I take myself, I swear I have to drag the proverbial me kicking and screaming from the car to the store.
In theory, I know what I want. In reality, I have no idea how to get it.
Ok, that's a big fat lie.  I'm inpatient, so I become rash, quick and I end up making horrible and pricey choices just to end the event.
I knew I needed some dress shirts for work. We have a LOT of them. Or had. They're dwindling. I don't know if we have sharp elbows or if the dry cleaning solutions fuck them up, or if it's just age - the shirts, not us - but we go through these spurts of ripped elbows. Almost always the left one. 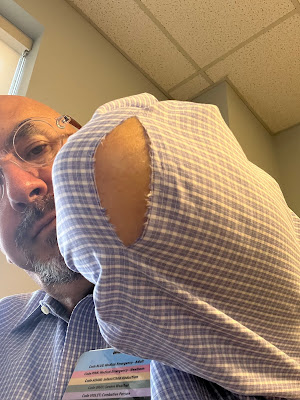 I'm like Bruce Banner.  Unfortunately the Bill Bixby one, not the Mark Ruffalo one.
710 and I kind of found a size we both could use, doubling our shirt wardrobe, but in reality, some of the shirts I was kind of drowning in. So, I had the clerk measure me, and I got some better fitting shirts for me.
Pants - ugh. Different story.  I don't have any pants which I like. I don't need for them to show off my junk or show off the curve of my butt, but I don't need them sagging like I have a Depends beneath them either.
710 suggested a store to go, and get them fitted. When he says things like that it sounds reasonable. When I go and do it, I considered him a lunatic.
What does Blobby do?  Grab five pair of pants - not the alterable kind - try them on, reject two, buys three, but doesn't like any of them.  This is spurred on by coming out of the dressing room and having wives, mothers and girlfriends back there waiting for their husbands, sons or boyfriends to come out to model their wear.
Get the fuck out of my way and away from the mirror.  Yes, there were no mirrors in the dressing rooms. And better yet, get out of the Men's dressing room.  Period.   I'm frustrated (clearly!) so, I grab my pants, and the shirts which I've picked, and go to the register.  The total, in my mind, is ridiculous. But it's Apple Pay so it doesn't feel like I'm really spending a thing with my face.
At the check out, I see the racks of unaltered pants. Dozens of them. I'm thinking I should stop this transaction and go over there and do what I should have done in the first place. But I feel I'm too far gone. And you know, I don't want to be there for 38 more seconds.  So I'm not.
I wasn't even out of the parking lot when I rationalized, I will bring back each pair of pants. I didn't like one of them, yet I had three of them. I heard the clerk tell someone else they had a 90 (!!!) day return policy, as long as the tags were on them.
On them?  They're not even out of the bag, or out of my car.
I'm wondering if I can talk myself into going back into a store within the next 90 days to even make the return.
.....and we didn't even talk shoe shopping!
Song by: Madness
Posted by Blobby at 12:07 AM

Email ThisBlogThis!Share to TwitterShare to FacebookShare to Pinterest
Labels: Shopping

I am surprised this is not "Shopping with Blobby"

If you are going to wear the pants regardless of hating them, then I do not see you having the incentive to return them. On the other hand, if you returned them you could purchase some pairs that showed off the curve of your butt, which you certainly don't NEED but might make for pleasant scenery at the office.

I find something that works, and order them online. The older I get the less I like shopping. Pants were always the hardest to shop for, the fit is inconsistent.

If the retail establishment has evening hours, take them back PDQ after work. Those who purchase clothes by committee should be unable to establish a quorum and should be home. At the end of the workday, grumpiness on your part may be dismissed by the staff.

However, if you ever find something off the rack that you like and it fits,I'd recommended the Imelda Marcos school of wardrobe management: buy as much of it as you can (reasonably afford and use).Works for more than shoes.