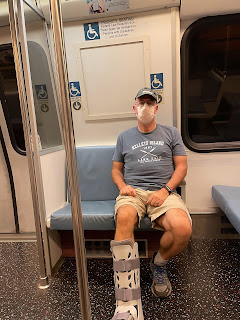 My official full day of wearing my boot was last Saturday.   ....the day we got into our beach town.

I like to drive, but it made more sense for 710 to drive to DC.  Six hours in the car, but not flexing the foot on the pedals seemed logical. He actually drove from DC to NC too, though I think I could have managed a shift of driving - though it is I-95, which is the worst of all roads ever.

I slogged around DC wearing it. It wasn't horrid, but it wasn't great and not convenient. Those DuPont and Cleveland Park stations escalators are LONG. But I had no real option but to just stand and let it take me up or down. There was really no climbing the stairs in that contraption.

710 said, of the blog image he took of me, I qualified on both levels to sit where I was on the Metro.

At the zoo, I did get to meet a kid - maybe 5 - who also had one on. We bonded, though he had a much better story:  went down the wrong way on a slide.

I needed a better story than:  "kicking ass and taking names", though that usually got a laugh.

Upon arrival at our NC destination, we stopped to get groceries before getting into our rental. Essentials like fruit, cheese, wine, bread, milk, wine, coffee, deli meets, wine, salty snacks and of course, wine.

In an aisle for something, a man stands right in front of me. I assume I'm in his way and scoot a few feet to the right, but he just stares at me.  I'd say he was my age, but probably younger and skin courtesy of the southern sun and the hair frayed by the unrelenting off shore winds. Not unattractive, but weathered.

"What the hell happened to you? he asked, as if I knew him or he had the right to know.

Without missing a beat, I came back with:  "I was quick, but the shark was quicker!"

He looked shocked and amazed.

In my head I counted to like 10 and then said, "Nah - I just hurt it running".  He laughed. But then he went into a few other scenarios:  "spousal abuse - the wife pushed you down the stairs".

710, being three-quarters further down the aisle turned and laughed a bit. The stranger then goes, "oh - are you two......together?"  I didn't know the direction in which he was going, but we both answered affirmatively.

He laughed and wished us a nice day. We kind of shrugged not knowing what it was all about.

As for the boot, it came off. The first day was fine, as was the second, though I don't think I got more than 4,000 steps in during one day.

Tuesday was another matter. I was feeling confident. Overly so, it seems. 18,000 steps - not all at once. And three swims. There was over exertion. And the rough surf pushing me places for which I wasn't prepared left the ankle a bit tender.  It still is.

I haven't put myself back into the boot yet, but I might without the doctor's ok. My follow-up is still about a week away, but should it remain "tender", there won't be running anytime soon and more probably physical therapy in my very near future.

You are still a guy magnet 🧲 you devil!

You get extra points for matching your shirt with the Metro upholstery.

Look. On top of everything else we don't want 710 being accused of elder abuse. You look spritely for your age.

All good thing in moderation, walking that is, wine knows no moderation.

what sort of wine?