Jupiter: The Bringer of Jollity 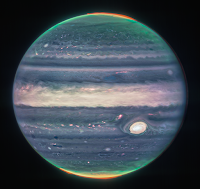 Lots going on in astronomy these days, eh?
Today (?) Jupiter is the closest it's been to earth since right after I was born.   ......that was in 1963, btw.
If you haven't seen the morning sky, I suggest you do so. There it is, in all it's glory, impossible to miss. It's tres impressive.
__________
Hurricane Ian is postponing the launch of an unmanned Artemis rocket and moving it back to the VAB for safety. Once again, it shan't be heading to the moon anytime soon - though I think that's a waste, myself.  Ian itself sounds like it's gearing up to be a whopper of a story, though probably not bigger than the one that is the eye of Jupiter.
__________
And last but not least, if you've every seen Armageddon, Deep Impact or Don't Look Up, you've already seen the fictional and much more (?) entertaining versions of NASA launching a rocket to blow up an asteroid headed towards earth.
I mean, c'mon. a Téa Leoni / Elijah Woods / Tasha Yar Denise Crosby vehicle.  How that didn't clean up at the Oscars is beyond me. I mean, Morgan Freeman was President !!!!  We're talking about Deep Impact by the way.  If it's on, and my husband is home, we're watching it. Well, he is.
Anyways, NASA flew a probe / spaceship / rocket into an inconsequential asteroid to see if they could nudge it off course or out of orbit. The movies always tried to blow it up, but that's what hiring Bruce Willis as your lead will get ya (that's Armageddon, don'tcha know).
We watched it live. I was less than impressed, but that more from the shiteous feed that NASA had. It will be a while before they knew if it was a success.
It didn't have an Aerosmith theme song, so in my eyes, it already was a success.
Song by: Richard Wagner
Posted by Blobby at 12:07 AM