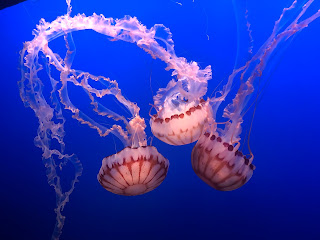 Pretty, aren't they?
Jellyfish are like 90% water and have no systems like respiration, circulation or a central nervous system, though they can fuck you up.
Case in point, our last day or vacation. Our last swim of vacation.
Correct or not, our afternoon swims would usually happen was the lifeguards closed up shop at 17:00. That was usually ok, as we don't venture out and never swim if there are known riptides.
And we never swim where there aren't others around, in the water or on the beach.
It was hot and we were in the water.  There were not tons of waves this go-round. So we bobbed around - or Blobbed around, as the case may be - and talked. When it got too hot, I'd dive underwater, letting my whole noggin get wet.
As 710 and I chatted, I felt sharp and painful stings. Multiple times. On multiple parts of my body.
I can only imagine what I looked like to my husband. I know my face and body parts contorted. How could they not.  It all happened so fast and as I wasn't wearing any contacts, I couldn't really see a thing in the water - not that I was actually looking.
I moved. I moved what I thought was quickly, but kept getting stung. Of course, while jellyfish (which was what I was assuming was stinging me) mostly drift, I don't think they come after people and chase them. But the current, which was behind me, as were the jellyfish. Still I tried to head to shore with 710 right behind me.
Now, I might have started cursing, Loudly. My verbiage might have made sailors blush.
It got people's attention. A few folks stood up - mostly to cover their kid's or nana's ears. 710 was trying to figure out what was going on and how I was feeling and where it hurt and I was not really able to tell him, as I wasn't actually sure.
He's asking:  stinging? shooting pain? localized? electrical? throbbing?   Whatever the question - the answer was yes. This was a pain of which I'd never felt before.
When I got to shore, a cute couple asked if I was ok. I wasn't sure. They were so cute I actually apologized for my language, though they didn't seem to mind.
Another man asked I got stung. So had he a little while ago (not sure if he meant hours? days? months?) I asked what did he do that helped.  "I looked up some hymns", he replied.
Never in my life did I want to say "Fuck! You!" to a person than I did right then and there. It's a testament to my strength that I did not.
As neither of us had our phones, we had to make our way to our rental. Covered in sand, 710 sprayed me off with the hose, which was a different kind of hell. We got upstairs to see the damage.  Honestly, it looked a lot worse in person. 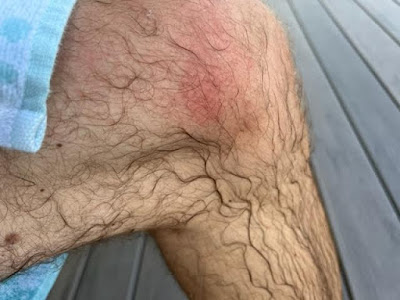 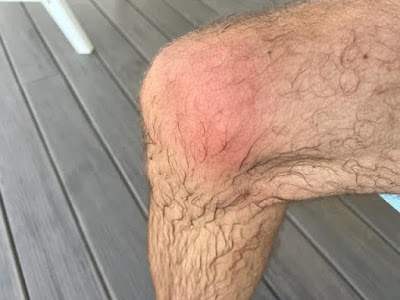 This is only my two knees. I didn't get pics of my calfs and arm.
Before you ask, NO, I did not ask 710 to piss on me. That's a wive's tale. And he'd have to buy me dinner first at least.  Best we could tell there were no tentacles stuck / left in me.  Websites said rinse with sea water!  As IF I was going back into the scene of the crime.  They also ice packs or hot water.
JFC - make up your mind one way or the other!  I went with ice .But after a bit I couldn't tell if the pain was from the burn of the ice or the sting itself.  I went inside and swallowed a fistful of motrin. As it would turn out, fabric touching any of this was massively painful. I air dried after a somewhat painful shower.
Of course, I had no calamine lotion or benedryl or cortisone cream. Before we went out to dinner, we hit CVS to clear them out of it all - just to be safe.
As painful as it was - and it was - where it was, I internally freaked that I just had my face below the water, and could have just as easily got stung on the head and face. Or peen! Or hands!  Honestly, the legs, back of the legs and arms seemed like the best case scenarios.
More importantly, I had no heart palpitations or any thing that could bring on respiratory distress or shock. It was all very inconvenient.
I suppose I can be happy it happened last swim of the last day and season. Had it been, say day one, I'd never have gone back in the water. I still may not.  Future vacations might be planned around having access to a pool.
Over wine, before going out to CVS and dinner, 710 said, well, you'll have to rearrange your blog posts now to get this one in.  I said I couldn't - it was Sophie and Shep day, I'd have to rearrange what I had planned for on Sunday.   ....and I did.
I hate that this has ruined the ocean for me. I mean, I'll see what previous years bring, but right now, I shudder at the thought of going back into the water.
Song by: Enya
Posted by Blobby at 12:07 AM

I knew when you typed the word Peen, you would survive this. Nature is cruel sometimes , without warning signs.

No jellyfish or sharks in Lake Erie

ouch ouch ouch
Indeed urine is often too dilute to remove the residual stings. Best to soak in the ocean.

Ow. That's not cool at all.