Eons ago, in the Tri-Village News - serving Grandview and Marble Cliff (think about it......think about it.....), - my friend Jon and I used to read their classified ads.
You know, stuff you don't really need or want, but it was ok to look. Actually, we probably did need the stuff depending on what apartments we were living in at the time.
The two I remember are mostly because we laughed and laughed at the people who placed such ads.
One was for a "colored tv".  We jokingly said it just played the Jeffersons and Good Times. This was a time when those were the only two shows probably on that had people of colour as leading characters. Yes - it was too early for Cosby and too late for Sandford and Son.
The other ad we found funny, but in reality was probably just sad:  "Wedding Dress $75 - Never Worn".
This brings me to Facebook. I know people love their Marketplace, but I've never been there to buy or sell a thing. I did become a member of their 'Buy Nothing Cleveland Hts" area.
People - for the most part - are good about posting things they want to get rid of at no cost. Most of them are semi-useful to someone.  Yes, you get the person who opened some food item and didn't like it so giving the rest away (ick!).  But even we gave away a king sized mattress and box springs this way. They had to come pick it up and move it themselves (well, we had already gotten it out of the house).
I mean, they had a son coming home from college who now has a king bed! I didn't have one of those until 1996 after we got our first house. I'm not sure we even had queens.
Honestly, I can't imagine them having something to give away that I want, but I look just to look.  .....and yesterday, this happened 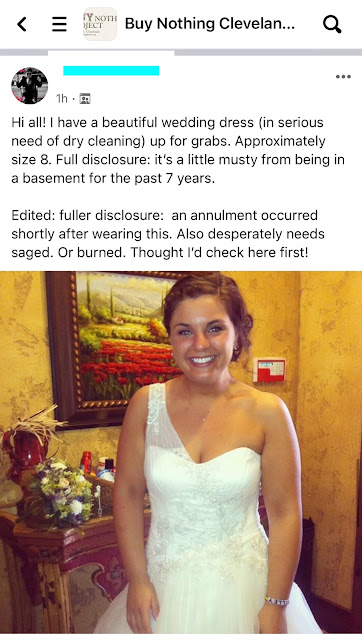 You now me and my lack of fashion sense, but "beautiful dress" seems a stretch. Even I knew that marriage was doomed with that dress.
Even if you loved it, why would you store it for seven years?  Annulment can't be good - ditch the dress when you ditch the hubby (or when he dumped you).
Free seems about the right price for that frock.
Song by: Talking Heads
Posted by Blobby at 12:07 AM

You should snag that dress in case you and 710 ever decide to renew your vows.