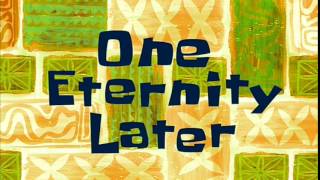 We are now on day nine: post jellyfish sting.

I'd like to say that it is all better - and it is better, but it's not ALL better.

You would probably think I'd look up online to see what the progression of such an encounter would be like.  You'd be wrong.

So the broad redness you saw in the original pictures (that's the hyperlink up above) pretty much had disappeared, along with all of the pain.  What was left was what I would call the center of the trauma. The actual marks of the jellyfish's stingers / tentacles / death claws.........or whatever they're called.

Even Friday, at afterwork beers, the doctor I went with wanted to see them. I mean, I could show some - that were on my knees by hiking up my pant leg, but you know, the rest were........private.  We discussed how good they looked and how much healing had gone on.

Saturday morning was a different story. 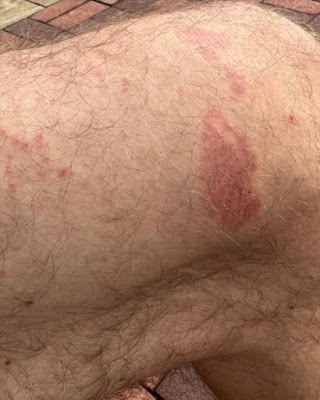 The problem up above is, not only is the sport darker and more pronounced (though if you have good eyes, you can see the deeper red 'tentacle marks' in that eye of Jupiter.), I have new areas of redness and marks that had not show before. .....and they're multiplyin'..... 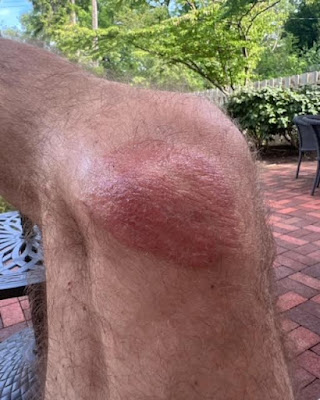 Then there is this monstrosity.
Friday it was about one-tenth of the size it is now. There is no pain, not really. But it's starting to itch, though I have kept my fingers off it other than to apply Cortizone cream, which seems to do nothing than make everything I come in contact with become greasy.
710 and I were sitting around last night discussing it. Should I see someone?  Good luck getting into a dermatologist in a reasonable timeframe.
During the convo, we talked about 'the event'. Honestly, we really hadn't. Yes, the after we got out - what do I need to do. But not of the moment.
You don't all know 710. Some of you do and know him as a cool (not like Fonzie!) and collected. Nothing much rattles him - and if it does, it doesn't show.
I couldn't tell you how he reacted at the time - or even after we got out. I would say I was focused on getting out, but I wasn't. I didn't know what was going on and just wanted it all to stop and hoped those motherfuckers weren't following me.
As I can see now in hindsight, he had no idea what was going on with me. I was giving no real words of indication of it either. Internally, he said, he was freaking out. I'd say "he didn't show it", but I really don't know, as I was not paying attention or focused.
So, I guess I'll see what the next few days brings in terms of my epidermis. It's a good thing my modeling career is behind me.

It’s so hard to believe they didn’t get him too. I’d at least try a Doc in the Box, but then you are back at work tomorrow. It certainly doesn’t look like it’s getting better.

A tower of strength and reason

I am saddened to see you are having such troubles.

I hope you find some answers and heal up soon. But don't give up on your modelling career just yet. If this hospital bureaucracy job doesn't work out then I am sure you would be a big hit on OnlyFans.