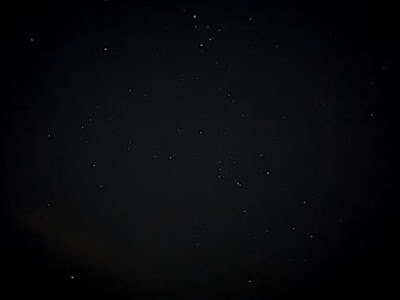 You can't tell by the picture, but it is off the night time sky at the beach.

You can enlarge the pic and should be able to see what I saw. iPhone13 does a much better job with this than previous iterations.

I have to say, most times at the beach, we find clouds - which I love - and an overcats sky in the evening, so I don't get to see this.

Light pollution always hampers it too, but this year, we had a different place that really had little light interference. Each morning, I got to see a vast sky of stars.

In a week's time, the positioning didn't really change, but I got to see a dipper or two and Orion's belt.

And the North Star. I'm sure I saw other things too, I just am not smart enough to identify them.

710 saw a full-on shooting star. I think I saw something that looked like that out of the corner of my eye, he just happened to be looking at the right place at the right time.

Stargazing is very tranquil to me. But you know, it's before 05:00, it should all be tranquil. The night sky and the sound of the surf. It's all very zen.

I will say, I never really see what astronomers saw. I can't make a dog, a man, a bull, etc out of celestial objects - and I was pretty good with connect-the-dots.

Not far from us - maybe 30 miles - is dark sky park, one of the top 10 in the country.  It is a park that has a vast open sky and zero (or near) lights to obscure the sky.  So dark that you can see the Milky Way. It's been a long time since I've taken a disco nap to go out in the middle of the night to see such a thing, but it is on my albeit small bucket list. During a meteor shower seems like the perfect time.

Well, at least Orion is as clear as it could be. Okay, so maybe it can't quite compete with the James Webb, but what else can?

I miss seeing the night sky here in the urban world

If I were to live long enough AND achieve retirement I wish to do so where I can see stars.