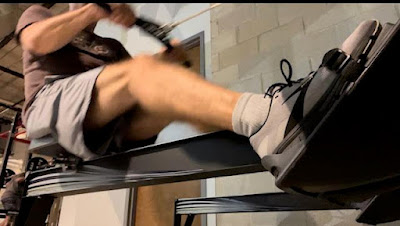 Six months.
That's how long I've been back at the gym, albeit a new one from the last 5-year-go-round.
Unlike last time, I have tried to keep my posts to a minimum, but in my mind (a dangerous place to be) upon joining, I thought, "oh, I could give an update every half year".
This is it.
Save vacation and / or being out of town, I go to the gym daily. Even if staying at hotel, I hit their gyms as well. At first, I was "only" going six days per week, but I found a way to make Mondays work - and it's cardio only. No lifting. That way I can still shower and make my every Monday 07:00 meeting.
It is unfortunate that with exercise I'm either all in or all out. Either way is excessive, and while I see it im myself and understand it, I am unwilling to change behaviour and have made peace with going daily. I think it has helped me from doubling my anti-depressant, which I considered doing.
I've come to enjoy music again - and get it listen to it for 60-75 minutes per day. I've stopped forwarding music. Bad or good, I listen to everything.
My goal is / was, to lose 22 lbs and to tone up. It's the vanity thing. Not the Vanity thing. I don't make such a pretty mess on my dress. But like Vanity, I do like seven inches or more.
I had a timeline for my goal too:  IMMEDIATELY.
.....but that didn't happen.  Bother.
Actually, I knew it wouldn't.  Age. Metabolism. Diet - or lack there of, all play a part in thwarting me.  It was gonna be a slog, and it is.
To make myself not crazy (hush!), I opted to only weigh myself once per month. The 27th of each month, since I started on the 26th or 27th of March.  I did miss my August weigh-in since I was on vacation.
710 says not to obsess on the weight thing. I get it - and yet I do, to a degree. In 30 days, I expect (read: want) to see some measurable progress, but that doesn't always happen.  By July I had lost 14 pounds - or 'a stone' as the Brits might say.  As of the other day, it was back to 12.
I attribute two things to this:  vacation - where I didn't eat that much differently, I did drink daily. The second part was the foot thing.  The boot. The no running. The little walking I even did on vacation.
But a lot of it comes down to the running. Or not running, as the case may be.
It's been since mid-August since I really ran. I tried thrice since, but the thrice-time, had an adverse reaction, so I'm back to resting and resetting.  Still, a lot of that 14 came off when I really found my stride. As you can see, I've taken to rowing, which has a lot less impact on my foot and ankle.
This is where I obsess about my weight and feel a little defeated (yeah yeah, I know what you're gonna say, but I do) when I gained back 2 pounds. Granted, I was wearing a pair of underwear when I weighed myself, but even I can't pass them off as lead-lined panties.
I suppose some of this could be muscle, which allegedly weighs more than fat.  ALLEGEDLY.
Defeated I am not. I still have a goal. Goals.
The other is definition: mainly of chest and arms. It's coming. Not as quickly as it did in 2009, but I'm seeing it. S-l-o-w-l-y.  Abs are another thing - altogether (you know what to do!).  Blobby is not made for a 6-pack, unless it is beer.  Flatter is better, the abs, not the beer. Showing any abdominal muscles is something else that probably won't be achieved in my lifetime.
I think I like the gym?  Sometimes with compulsion comes blurred lines. I need the routine, and it soothes me, but it's not the same as 'like', though they are necessarily exclusive to each other.
So, while you get tales from the gym - hopefully amusing ones - there might not be an update like this for 6 more months.  .....though maybe something thrown in for my year-end post.  One never knows.
On a final note - why not a before and during (it's not after...........not yet) shot. 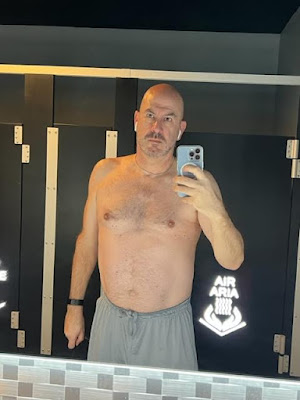 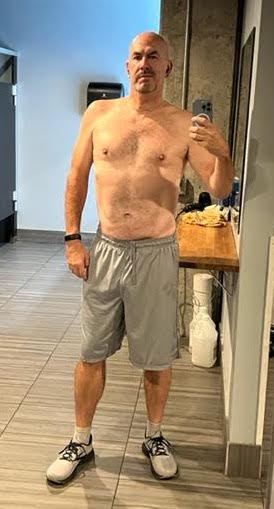 I'm not even sucking it in during the last picture.  I think it (ha. "it" = me!) looks a little better. Yes, 12 down (10 to go!) and some firming up here and there. I won't be joining any body building tournaments or Only Fans anytime soon (read: at all), but who know - March 2023, I might be where I want.
Song by: Audioslave  (though thanks to Morty, for the last 20 yrs, I call them Audiosalve)
Posted by Blobby at 12:07 AM

Well, if not an OnlyFans then at least you could audition for Fearsome's blog.

Independent of how you look, I am glad that you are getting exercise to stay healthy. It sucks about the running injury, but rowing is pretty good exercise as well.

Good for you. I try to see my trainer 2x per week to keep me honest but traveling for fun and work has thrown a wrinkle into those plans lately and ever since our n'hood gym closed and I have to hoof it over to the gym in the next n'hood I've barely gone.

I too thought 'good for you!' you inspire me to keep going.