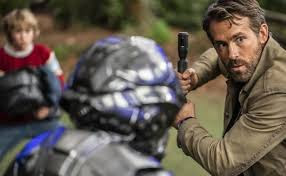 I neglected to write about seeing a movie on Netflix. 2012 was its release date, but it was a full length film, we hadn't seen it and we sat through the entire thing. So - it counts.
Quartet was the movie, and it was directed by Dustin Hoffman about a senior living center for retired / aging musicians - mostly, if not entirely, of the classical genre (including opera).
It was slow paced. The storylines were there, but barely, and no great resolution to anything - at least for good reason. Maggie Smith is the big name, though Billy Connolly does the best job.
It was fair at best.

This last weekend, we saw another Ryan Reynolds, made-for-Netflix movie, the Adam Project.

It was cute and all and only semi-original. It was at least way better than that POS thing he did with the Rock.

Without giving too much away, it does involve time travel.  And it's mostly been done before, as snippets from many other movies seem to show up here.  Different scenes seem to come from - and in no particular order - Mr. & Mrs. Smith, Empire Strikes Back, Return of the Jedi, Field of Dreams and yes, the Time Traveler's Wife. And one line is lifted from, and as an homage to, Reynolds' own Deadpool.

For the most part, the cast is solid. Though people keep hiring Jennifer Garner for some reason. She's a little milquetoast-y, but like from Love, Simon, she plays the 'every mom'.  Mark Ruffalo is in it, so always bonus points there, even if he's cast in another role that makes him a disheveled man who doesn't own a comb. And an unrecognizable Katherine Keener in her present day state - though more so in her creepy CGI earlier self state.

Zoe Saldaña is in it, but she is contractually obligated to be in any movie with space ships. She has two Star Trek movies under her belt, two Guardian of the Galaxy flicks and now five (!!!!!!)  Avatar movies that have filmed or are filming. She might be better in the Ryan Project than the others.

The kid in the movie starts off a little weak, but I enjoyed his performance. Reynolds is Reynolds. While not quite one-note, he has a style and has been milking it for a while. He's not as cheeky in this as others, but it wouldn't take much.

It was a fun-ish two hours. It won't stretch any critical thinking cells you might have going on upstairs, but that's ok too.

There are five Avatar movies?! Did four of them go straight to VHS?

Ive heard there are more Avatar Movies , liked the first one. James Cameron is mean and crazy but some talented. I like Ryan Reynolds, much better than Tom Cruise.

OL - Four of them haven't yet been released. James Cameron is filming them all at once.