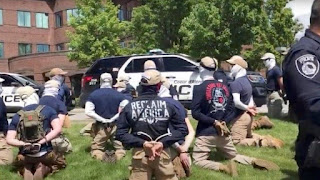 In case you weren't aware - White Supremacy is alive and thriving in the U.S.

When we bought this house two years ago, the previous owners left behind 4-5 tiki torches. At one point they were probably whimsical for a backyard evening party.  All I see are white folks in Brooks Brothers shirts marching in Charlottesville.

Of course, maybe the previous owner took them to (and brought them back from) Virginia to march through their streets to scare off the black and Jewish populations. I mean, what do we really know about our neighbors and acquaintances?

Like clockwork, I said after the backwards fucktards got their hands on regulating women's bodies, they're coming after the 'mos.   ......and they did.

31 white nationalist pussies from all over the country gathered in northern Idaho with probable plans to riot at a Pride rally in Coeur d'Alene, the gayest named city in the state.

I call them pussies because of course, they covered their faces at time of arrest, so they wouldn't be identified. I LOVE that the Coeur d'Alene police released their mugshots, names and where they resided. They're "man enough" to take on the homos, but fragile enough to fold like a house of cards.

Still, the Patriot Front are scary as fuck.

Here's a little info from the Anti-Defamation League:

Oh - and now the police department are getting death threats for arresting the dipshits. That was just a matter of time, and only a little while longer before one of these groups acts upon that.
This country sucks.
And just to fuck with them, here they are, and I'm linking to their arrest records with their names for all to see for years to come.  Or until I end this blog.  Neanderthals, all. 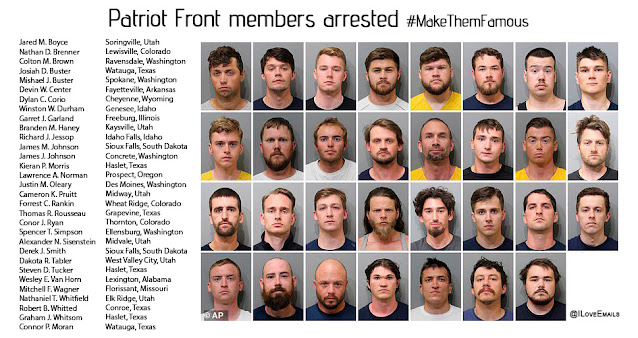 I wonder how many of them put "masc4masc" on their Grindr profiles?

(Joking! With their facial hair most of them are probably on Scruff.)

I wonder how long before they start losing their jobs?