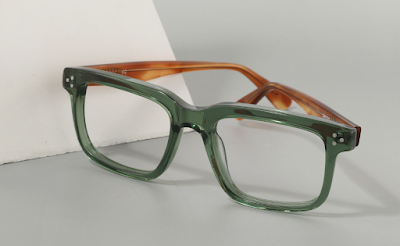 For the second time in my life, I've tried getting glasses on-line. Time #2, while not a home run, at least is a lot better than time #1.

I have expensive tastes when it comes to eyewear. More often than not, that "perfect" pair wears out its welcome before my next eye exam. That said, I still like my last two sets of glasses. But it had been two years and I thought it was time for a new set.

However, I figgered since I had two decent and pricey pair, I'd go the much less expensive route. After perusing a couple of on-line vendors, I stumbled upon Payne Glasses. Going a little further, I stumbled upon the frames on their entry page for Men's Eyewear.

Of course, I looked at other options on their site, but I kept coming back to this 'new arrival'.

Coloured frames hadn't been in my repertoire. Black, brown, brushed silver maybe. And out and out colour?  Nah.  But the contrast of the brown arms and the front-facing green portion intrigued me.

It didn't hurt that with progressive lenses, these were only $52.

Blobby couldn't stop there though Yes, I got lenses that would transition in the sun. Or that should, I should say. That added $60 to the pair. Still, $112 is a lot cheaper than the 5-6 times I'd pay at the optical store.

Oh, and since it was my first pair from them, $32 for insurance. If I didn't like them, they'd take them back. I'd get reimbursed except for shipping and well, the insurance.

From order to delivery, it took six days.

Oh - and this is mega important: I don't understand glass sizing in the slightest. I did zero research on it and since it was a brand new release, somehow their software wouldn't let on virtually try the glasses on. So, I bought them not knowing how they'd fit or how they'd even generally look.  So..........ya me?

As it turns out - they fit. 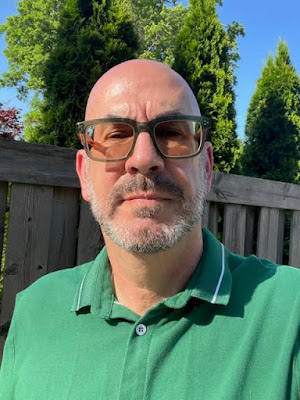 The nose bridge is fine. The arm length is fine. I think they might be a little too wide in the lens area, but no one else seems to agree with me. It seems I'm more than easing into my Jewish old man look. A slightly hipper Swifty Lazar. And only slightly younger.

The lenses themselves are A+.  Clear. Clean. The progressive part changes where it's supposed to.  The tint? Not great. Almost non-existent. 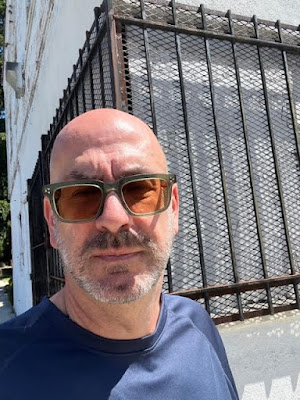 It's looks darker than it is in this picture, but I went with a brown tint to somewhat match the frame arms.

If I get a next pair, since they did such a good job, I could ditch the tinting and the insurance and save myself $100. I would buy 7-8 pair for the price I paid for my "real" glasses.

The green looks great, but it doesn't truly stand out, depending on what you're wearing. It gives more than a hint of colour, but doesn't smack you over the head for attention.

Even for roughly $150, it's a decent price for a decent, if not perfect, pair.

I'm going to be looking for new frames myself pretty soon. I may give those same frames a try!

After just getting 2 pairs for my mother in person for more than 1000.$ You did well .

Nice, the fit thing has always been a hurdle to ordering online. Warby Parker has some local retail outlets, I did progressive bifocal sunglasses there for under $250. About a $1,000 less than the place at the mall wanted.

With the green, you're just a hop, skip, and a jump from Sally Jesse Raphael red frames. It's a slippery slope.