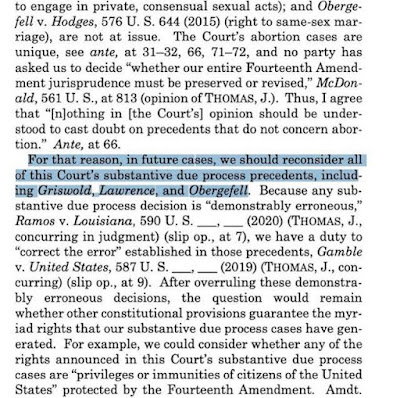 I knew the abortion ruling was coming.  We all did. We knew what the ruling would be - and yet, I took it like a punch to the gut.
The relaxed gun shit was a bit of a surprise too.  So the week for many of us wasn't great. We are living in the wild west - guns and where women's rights are dependent on white men.
I will admit, I don't have fully formed thoughts on a lot of this. That gut punch knocked the proverbial wind right out of me. The decision announcement to drafting this has only been 36 hours too.
Chatter on the intertubes has me up in arms - on all sides I might add. Mind you, I don't know a lot of pro-lifers, or they have the common decency not to say anything to, or around, me.  I stopped self-inflicing wounds by really not looking much at things like Faeebook.
But butthole politicians are having the nerve to use my phone number to text me: Nancy Fucking Pelosi texting me for $$$ to fight this.
Sorry you stupid twat, that fight is O-V-E-R. And guess what, it's over for my life time.  It took 50 years to overturn Roe v Wade. Do the math on these asshole judges sitting on that bench and anything that comes before them in their lifetime term.  Oh - and 2024?  Welcome to another republican president who will appoint more republican judges.
Seriously Nancy - what the fuck are you going to do with the $20 you're asking from me? Building a time machine, are we?
This was my response to "her": 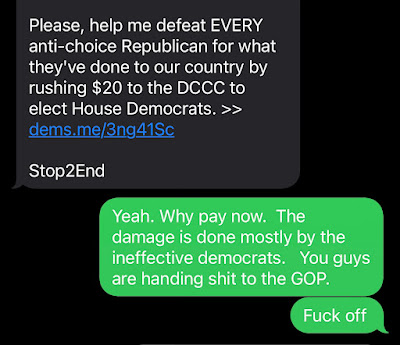 I knew it was a bot, and I knew no one was actually reading it. But for a nanosecond, it made me feel better.
I also got one from Ohio's wanna be a senator, pretty much asking for the same thing, but to defeat his wanna be rival.  I feel forced to vote for Tim Ryan in the fall, but honestly, he I believe he will be Joe Manchin II.  His current ads tout how often he agreed with BLOTUS.  I get he's trying to sway fringe righters, but he's alienating me.................big time. One of his sayings is roughly, "I don't represent ANY party".   Clearly.  So - then why should I give you my money?
Of course, the second sting is from Clarence Fucking Thomas' written decision show way above. He's coming for contraception and same-sex marriage.
I am fighting making this post about the potential dissolution of my marriage. Don't get me started on a threat to a woman's right to contraception and the pro-life shit. I get they don't see the irony in it, but it is a fucking dangerous irony.
What they do get is that while saying no to abortion is not saying yes to the child.......after it's born. There will be no affordable housing for the working class (or impoverished) who are forced to have children.No one in this congress is increasing funding for WIC or food or heat for the families of these kids. Schools will not be funded for sex education and contraception (see C. Thomas reference two paragraphs above.
There will be no one picking these kids out for adoption or fostering - which are roughly 100,000 a year for adoption (and that's just US kids, not foreign ones) and the 424,000-672,000 children in the foster care system - depending on the year.
The social services are not the GOP strong suit.
The church is loving this though. An endless supply of pre-teen hole for all the priests!
When I say it's too late for Roe v Wade - and it is - it doesn't mean people should stop fighting this. All of it. Each of these things will get peeled away. In theory this could really jack up the mid-terms, but those are months away and we have a strong history of short term memory issues.
But we are going to have to fight for gay marriage (again), voting rights and no doubt civil rights. More than half the justices lied when they said "Roe is settled law".  Maybe a few follow-up questions would have been prudent.
So there is no reason to believe other laws in the books are not about to targeted.
Welcome to the new reality.
Song by: the Cardigans
Posted by Blobby at 12:07 AM

I was surprised when I saw the ruling on our news yesterday. It certainly seems a draconian backward step. Not much more I can say about that. I liked your text though. The “fuck off’ was a nice touch. I hope it made you momentarily feel better.
JP