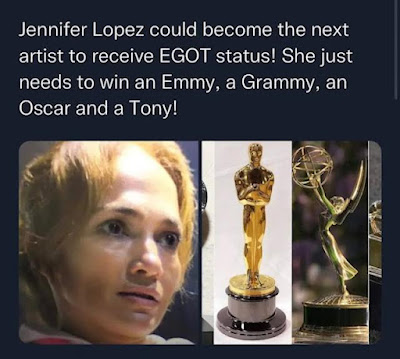 I've read blurbs about her Netflix special, which seems more common than special. She films herself - or has others film herself - getting news she didn't get nominated for her being in a movie about stripping.  I mean, for fuck sake, you don't hear Tatum Channing (Channing Tatum?) whining about the same thing, do ya?

I am with her on her assessment that is was stupid have two acts at the Super Bowl. Shakira and J.Lo?  Exactly!  Having none would have been a lot better.  Shakira's hips might not lie, but neither do my lips. At least in this case.

I'm a little surprised she doesn't have a Grammy since they give those things away like candy on Halloween. Oscars too. Yeah - I'm looking at you Cuba Gooding Jr.

But to whomever wrote the meme above.......thank you!  It was not in vain.

Maybe she is an entertainer instead of an actress. The one thing she hasn’t failed to obtain is a huuuge bank account. Jenny from the Block is a cash cow.

Who is Jennifer Lopez?