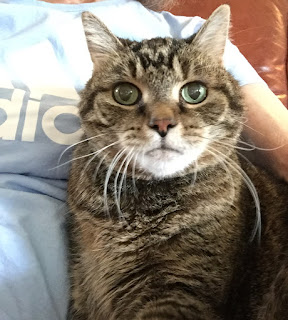 My friend, Jon, has commented on how inappropriate this Ringo Starr song is / was......even back in 1973. I suppose it is, unless he might be singing about his cat, and not the teenager he's trying to bang.
See, I can say "singing about his cat" because yesterday, Sophie had her Sweet 16.
It's amazing we got her back in 2006, months after Kylie passed. But Tovah was so lonely - until this monster came into the house. How a 2.2 lb kitten could be alpha to a full grown cat amazed me.
But Soph is a good girl, who, overall, is in pretty good health, though I am experienced enough to know this time is a critical age area for cats.
She plays, she jumps on things when she shouldn't. She purrs. But she HOWLS.  Something g-d awful, a sound you haven't heard before.
We are guessing some kitty kat dementia maybe?  I know she knows where we are, but she will just HOWL.   .....and at times you'd really rather she didn't.
Since just past kittenhood, she's always been Rubenesque. But in the last 18 months, she is down to what a cat should weigh - about 9lbs. It's hard to see her and think she isn't thriving because she isn't chunky, but I have to tell myself it's a new phase.
We monitor her food intake and box output, just to ensure all systems are semi-normal.
Most importantly - and for the most part - she gets along with her brother. He rarely sees her as prey anymore, which is good.
Still............16. I'm amazed and we are lucky she is still bringing us love all these years later.
Song by: Ringo Starr
Posted by Blobby at 12:07 AM

Happy birthday, Sophie! I hope you stay healthy for a long time.

She's sixteen, she's beautiful, and she's......YOURS! Lucky, lucky you - and lucky, lucky her. Many happiest of returns to you, Soph dear.

Happy Birthday, Sophie! You are a beautiful girl!

My cat, Tiger, lived to be 17 and was healthy until the very end. Don't mean to alarm you, but you mentioned, "This age." He passed in 2015 and still miss him pretty much everyday.

And Happy Birthday to Sophie.

I had either forgotten or never knew Sophie is an old lady cat. Good for her! An 'Old Deuteronomy" type.