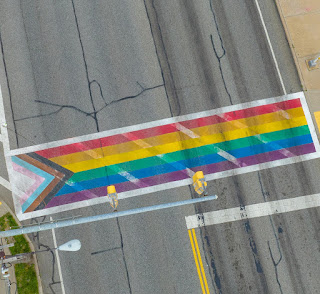 It is Pride month - though I know parades go year-round, depending what part of the States or which part of the world in which you live.
Cleveland's Pride has always been sad.  There have been times the time / place isn't even on the official website - that is how unorganized it is.  The turn-out has been just as sad - but some of that you can account due to the previous sentence.
I don't think we ever break into 5 digits of people at the parade (watching or participating), let alone at the gathering spot at the end, where all of the sudden, the banks, insurance, car dealers and such want your dual-income, no kids $$$.
Columbus - 129 miles to the south of us - regularly has a 500,000 attendees.
To me, that is daunting. I'm a semi-extrovert who hates most people and crowds that size.  You just can't win with me.
We haven't been for years, though it's probably not a bad thing to show up just for the numbers. Especially in these trying times. But honestly, when aren't they trying?  Someone is always after the gays. The last few years "they" have been focusing on trans folks. But it's been nice that the homos that usually turn on each other at the drop of a hat have really (well, kind of) pulled together to support the trans community.
More often than not, I see the Pride flag that now has the trans triangle as part of the design. Less and less is the striped one.
As Cleveland goes, there are two-ish gay areas. Lakewood is gayer, but boy gayer.  Cleveland Hts, is gay, but a good mix of gay men and women - if we are going by cis-terms......which I know I can be jailed for not being as correct as I should.
The Hts is more liberal in general. About half of our population is Black, and Lakewood is kind of whiter than white........ok, it's not that bad, but still.........   Cleveland Hts is a lot more hippier (not hipper) than the rest of the 216.
So, I am heartened that this year, we have gone slightly gayer and pride-ier.
We have a cool, young mayor - our first elected mayor. Before it was a city council vote. He's single, but straight (allegedly!). He's middle eastern by descent. He is also the first to fly this flag at our own city hall. 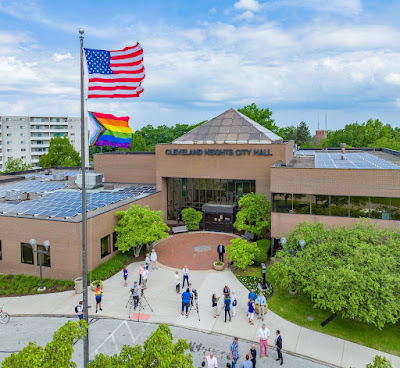 In his statement Mayor Kahlil Seren, mentions that Pride month started and much more than a month. Yet the flag only stays up for the month. I get it - it can't always be about the 'mos.
But the city went farther. As you see in the title image, there have been multiple crosswalks that have been gayified.  Four of them, I believe. 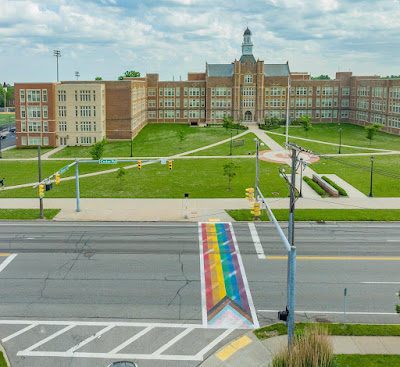 ....including one that goes right to the high school. 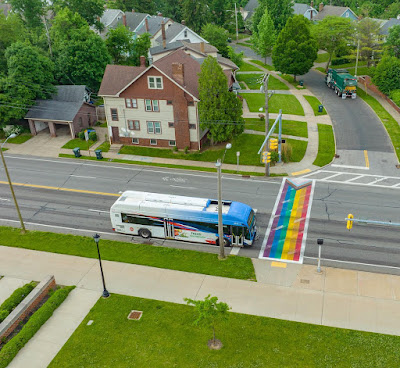 I'll take it.
They say any publicity is good publicity, but I've never been one to buy into that theory. But I'm down with this. This is good.
Song by: Tegan & Sara
Posted by Blobby at 12:07 AM

Expect the crosswalks to be defaced with tire skid marks within days.

It’s a Good thing, Good on him!