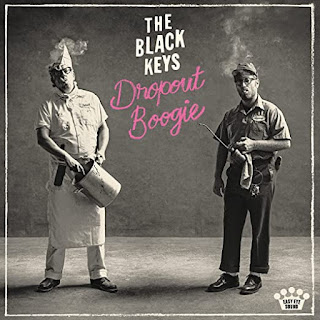 Lately, my 'shuffle' seems to be mostly about the Black Keys.  I'm not complaining.

Working out is where I hear the most music these days. 70-100 minutes per day of music passing through the phone of i.

During this pandemic, the Black Keys have been fairly prolific. Three albums in as many years, though their last one was of other folk's blues material. Their newest is Dropout Boogie.

The Keys have been knowing for merging Southern rock and the blues. They don't stray from what they know here. It's more of the same - some of it good, some of it fair, some I don't need to revisit. That trait would be different than El Camino or Let's Rock. I continually went (and go) back to those recordings.

I'd say most of their disks have 1-2 radio friendly "hits" and Boogie is no exception. The first two tracks are unsurprisingly the album's first two releases:  "Wild Child" and "It Ain't Over".  But unless you're my iPhone, you're not really going to hear them on radio - satellite or terrestrial - played to death.

They are good songs, but there are others. The off-beat "Your Team is Looking Good" and the closer "Didn't I Love You".

The rest of the sons are serviceable and fine, but 34 minutes of music is a little skimpy. But again - three albums in as many years. Material might be dwindling. And Billy Gibbons from ZZTop doesn't make that big of impression with me. I get he's a good guitarist, but so is the Keys' Dan Auerbach.

Unlike some Keys songs / albums, I will put them on to listen. Boogie comes on while I'm lifting or doing cardio and it is fine. It helps me power through, but I'm not necessarily pulling it back just to play. Again, none of  it bad, but most of it done before.

Wild Child is good, but I hope they're giving EMF royalties.