For You to Notice 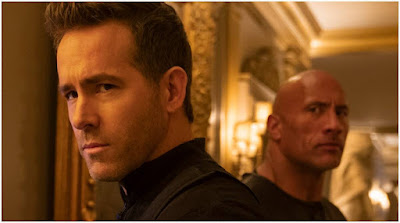 Just because you can make something, doesn't mean you should.

Case in point:  Red Notice, a movie not just made for Netflix, but is also its #1 watched film of all time.

I mean, it was alright and all, but that's about the highest praise it's gonna get from me.

No one - and I mean no. one. - is winning awards for acting, direction, writing or originality.  No. One.

I think I was exhausted by it all from the opening action scene. This is not Indiana Jones or James Bond (Daniel Craig years). Those can be exhausting in, 'wow, need to catch my breath' kind ways in terms in action and ingenuity. This was just exhausting. Period.

I honestly considered hanging it up then and there, but, like the survivor I am, powered through the two hours (it seems longer) flick.

All of this is brought to you by, and starring, the Rock.

Sometimes he can be light-hearted and fun. This is all phoned in, wooden and lifeless. And I'm being kind.

Ryan Reynolds is by far the star here, but considering his co-stars, he didn't have to try too hard - and didn't. Yes, his character has "witty" repartee, but it's not on the Deadpool level. Far from it. The guy who wrote and directed this thing did it by the Film By Numbers for Dummies manual. To. The. Letter.

Gil Gadot seemed ok? Save an SNL, I've never seen her in a thing. Wonder Women is not my thing and if word of mouth is to be believed, Wonder Woman 1984 was no one's thing.

There are scenes close enough to National Treasure and Raiders of the Lost Ark where homage comes a little too close to plagiarism. I'm guessing they get off the legal hook when Reynolds starts humming the score to Raiders.  Parody. Satire. Whatever you wanna call it - but you've seen it all before.

Oh - and some of the CGI was SO bad. This is 2021 (well when it was made). I'd says Netflix spared no expense, but then there is that CGI, and clearly they did.

Oh - and everyone is a Storm Trooper.

Not one life lost in this movie, no matter how many machine guns, shoulder launched missiles or explosives are used. No one can hit a thing. There might be one or two TBIs but going by the aftermath, people pretty much get up and shake their head in a 'what just happened' kind of thing.

It seems no coincidence to me that this is a Netflix movie and it happens to be their most viewed movie of all time. I guess that's easy to say so people might watch to see what all the hoopla is about (Guilty!). But like a good accountant might ask you:  'what do you want the number to be'?'

Netflix has been around for over a decade, but a movie released around Thanksgiving surpasses all else that has been seen for 10 years?  Or is it just the most viewed filmed 'made by' Netflix?  That number is a lot lot smaller.

I think the shittiest thing of this is all is: they wrote, directed and played it so it could (and will?) be a bunch of sequels.

Well, I learned my lesson.

I don’t think Ryan Reynolds will ever be George Clooney , but he is cute. I don’t like Any sort of entertainment The Rock tries to provide. If you watched it you are a better man than me.