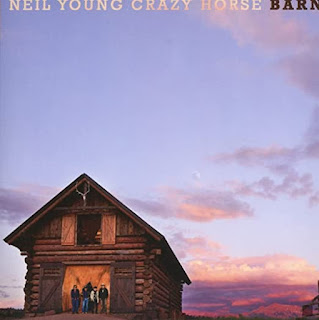 I so love Neil Young.

It could be said just for his music, and honestly, that would be enough, but he's so much more. As a Canadian, he seems to care more about American than U.S. born people. Actually, I think he just cares about humanity.

I had planned to purchase his new disk, Barn, when it arrived in mid-December 2021, but you know....life got in the way.

But with his decision to remove his music from Spotify, damned if I wasn't going to give $1.24 to him and $8.75 to his record label.  I'm assuming that is probably the split he gets.

For those not following, he gave Spotify an ultimatum:  remove Joe Rogan for his mis/dis-information of Covid vaccines, or pull he'd pull his music.

Now.......any business person could have told you the outcome: a guy who is in the headlines most daily and has a fucked up, but massive, following;  or the aging rock musician ?   $$$$ are going to be one the wrongly relevant douche.

....and that's what Spotify did.  But so did Neil. He pulled his music. And honestly, for what Spoltify pays artists per play ($0.00437 !!!! ), I'm not sure Mr. Young is taking a financial hit. But hopefully, the listening public will notice.

BTW - as of yesterday, Joni Mitchell is also pulling her music as well. Let's hope some bigger artists make the same demand. As much as I don't care for their music, where are you Taylor Swift, and......well.....let's be honest, I don't know many contemporary "artists".

Young had polio as a child and Mitchell has MS. I dare say they know more about medical treatments than Joe Rogen.

So, Barn is Young's newest disk with Crazy Horse - a band that he formed that occasionally records with him (14 times out of Young's 41 albums, over almost a 50 years period. The barn mentioned is one in Colorado that Young built and the band recorded this disk.

Crazy Horse rarely strays from almost Americana, acoustic, harmonica and accordion and then to their heavy electric guitars with distorted sound. No easing into it - just changes song to song. Young isn't known for his vocals, but that is his charm - at least to me. But I've always liked the way the guys in the band harmonize with him and make it sound warm and just great.

Barn isn't perfectly thought out. Actually far from it. While not written and recorded in real time (though some songs were), all are extremely recent songs, with the band getting together (safely) and recording quickly, often with no rehearsal. Most tracks are first or second takes.

"Canerican", which could be off Rust Never Sleeps, covers his Canadian to Amercian roots. I'm assuming that "Shape of You" is about his now wife - Daryl Hannah (who directed a documentary of this, also called Barn. Riveting!).  Yes, you read that correctly. And without a doubt it is the weakest track on the record.

The album opens and closes with the longest tracks (6+ and 8+ minutes), but both songs really encapsulate Crazy Horse. Both "Song of the Seasons" and "Welcome Back" might be the strongest tracks.

I like the familiarity of a Crazy Horse infused Neil Young record. Have they done better?  Sure, but they're still out there plugging away every few years. The playing isn't tight, but it's not meant to be. They play on instinct and the knowledge of each other.

I can work with nostalgia.

I am not familiar with Mr. Young but I plan to find out, given his honorable move with nasty Spotify.