Snowed In at Wheeler Street 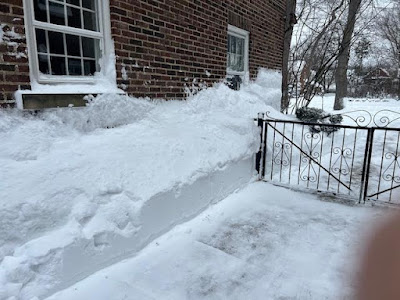 That's what we were, I tellz ya.

The weather service(s) were calling for the big storm to come from the South. Depending to which on you listened, we were getting 2-5", or 5-12".  It's a big difference, of course, and while we live in 'the snow belt', we straddle the line of the hard hit area, and the disaster area.

You see, if Lake Erie doesn't freeze over, the wind coming off it adds moisture, which produces a lot more snow. So while the west side of Cleveburgh can get a dusting, by the time that same wind / storm comes over the lake, well........we aren't that lucky.

Honest to Yahweh, I honestly could not tell how much snow we got when looking out the window Monday morning. 710 had already decided to work from home. I shower, shaved, shinola'd and dressed. I took one step off the back porch and went mid-shin deep in the white stuff.

I knew then and there, I was going nowhere. Still I trekked to the garage to secure a snow shovel, knowing we'd need to make a path back to said garage for the snowblower, and another path for one Mr. Shep - or as I call him, Mr. Poopers.

Those strong, but short ,legs can certainly bound through drifts et al, but when you gotta squat to do your bidness...well, one needs solid ground of some sorts.

710 took an hour or so to clear the driveway and walk with the blower. This house isn't like the last. We had a massive yard on to which we could direct the snow. Now, we can only go straight down the driveway until we get to the front, and even then can only toss left, as it would be rude to direct it to our neighbor's front lawn.

Almost no one made it into work. I was worried, of course, but as it turns out, few patients showed as well. But due to Covid, we are adapt to flipping our appointments to virtual as needed - and if the patient has that capacity. I am pretty shocked how many do not have smart phones - which I just assume anymore is like the standard.

MLK Day helped and hindered everything. Less traffic on the roads, schools weren't disrupted because they were closed anyways, etc.  But a lot of city workers are off on MLK too........including.....and wait for it...........snow plow drivers.

Oh, and there is a massive shortage of things like school bus drivers and......wait for it.......snow plow drivers.  I guess they're not 'things', but people.

This is our first real big snow of the season. Everyone said it would happen, but the services weren't there, for whatever reason.

I still had to work, I just did it from home.  But I made it to the office the next day. Life goes back to semi-normal.  The snow had to go somewhere, and unfortunately for anyone elderly or disabled, if you needed those slight ramps from the street to the sidewalk you were fucked. I was climbing over 3' mounds to get to the street or sidewalk.

So, while we are technically a month in, Winter has actually begun.

Be safe and warm !

We have had winter, I am over it, ready for spring to start.

I know you won't want to hear this but I miss snow days like this.
I so loved them as a child, and this never stopped I suppose.