It's tough to call this a 'month'ly topic of post.  I suppose I could go with 'annually' or 'quarterly'. I just don't download apps much. I use most even less. Yes, I'm looking at you 'Zomato'.
You'll all live. I have.
710, knowing my love for work games, brought me a new one: WORDLE.
The premise is simple. You have six attempts to guess a.....well any......legitimate five letter word. And you only get one attempt per day.
Simple, right?
It's not like you're ever gonna get the word on the first try.   ........probably. 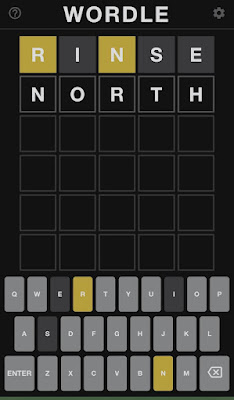 You pick your first five letter word and hit enter. Sorry, I forgot an earlier picture.  I chose a word at least with two vowels, as I believed this would give me an easier chance if I could eliminate some of those five.......and sometimes 'y'.
Going by the gold-ish highlights, I know those two letters are in the word. But since they are not green, I know those two letters do not belong in the spelling order.
The letters that are not highlighted are not in the word.
So I moved the N and the R around and chose three new unused letters. 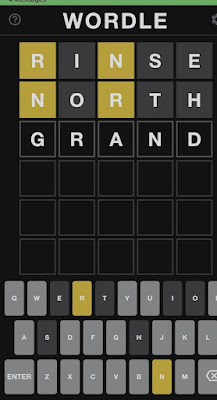 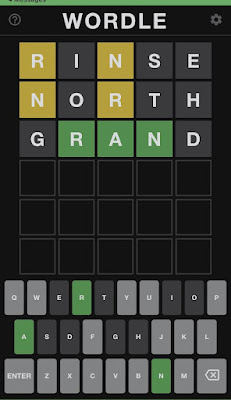 So, with the green, they are the right letters in the right space. 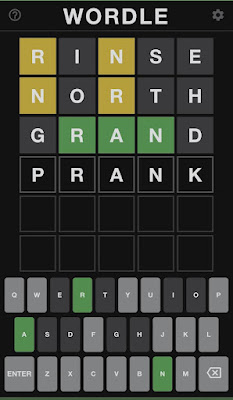 To me, it comes down to 'crank' or 'prank'.
I opted for the latter. 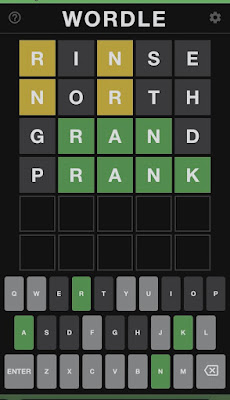 I chose unwisely.
I guess now, it could have been 'frank'. 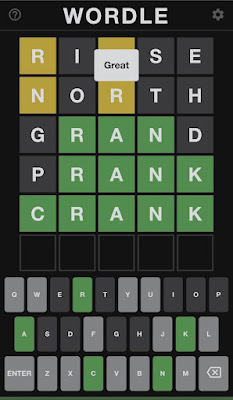 Honestly, the beauty of this game is: you can only play it once per day. I would spend far too much time playing multiple games per day.
710 got the word in four attempts.  I'm gonna have to up my game.
Posted by Blobby at 12:07 AM

this one sounds fun; I will give it a try.

Yes, I'm addicted too. I just got my mother into it.