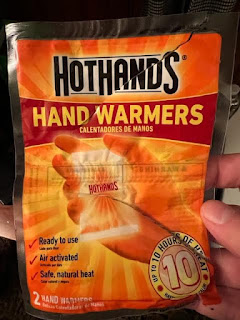 You know, often, this entry is more humourous than it is of help. Sure, now and again, there is actually something to show or recommend (like today), but more often than not I just like poking the bear.......so to speak.

Yesterday, I mentioned the coldness of the 216. It's not getting better. Quite the opposite.

I actually do pretty well - for the most part - outdoors. With the right jacket, hat and mittens (yes, I have never found a pair of gloves have never kept me warm), I'm actually ok. I have flannel lined jeans, but rarely wear them. 710 wears the ones I got him 10x more than I do.

It is inside cold that bothers me. When I can't warm up inside (no, not like where my heart is supposed to be!). I feel betrayed when I am inside and still have to sit on my hands to warm them up. We have four walls, a door, a window - and heat. I shouldn't still have to be cold inside.

The "new" house is better than the old, so that's part of it.

My sister-in-law bought these things.

They are a nice idea, but nothing I would have plunked down money for. Mostly because I'm cheap.

But, they're shareable. Once taken out of the packet and massaged / rubbed, they start to give off heat - and then do so for (allegedly) 7-8 hours. So, she can use them for her walks, and 710 or I can use them for ours.

You just take one per mitten and slip it in (that's what she said!) 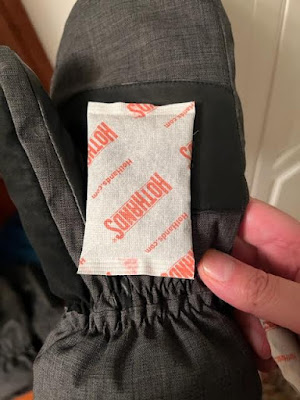 They can go in boots, but that seems like discomfort waiting to happen. Not the heat, but the bulk that will invariably slide into the wrong place while taking stride.

In theory, these are probably good to have in your car in case of being stuck, or if you're out on longer hikes - or if you want to take longer hikes and it's colder.

Reading reviews makes it sound like each opened pair (2 per pack) can last weeks. You have to put them in an airtight container and you can take them back and and re-massage them back to life. We haven't tried that yet, but hey, why not give it a shot?

As the upcoming weekend still looks brutal, but Shep still wants to go out for longer hikes, why not use them there and there. For me, they wouldn't be an every day thing, but for snow blowing and shoveling and such - why not try them?

Oh - and again with the 'allegedly' - if you buy them off-season (read: summer) they're a lot cheaper. Now that IS up my alley.

Looks like a good product . I thought it was something to eat or a sex aid. And she did say “ you just slip it in”