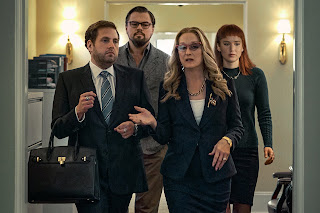 I have a problem with Adam McKay films.

The problem is: with his last three movies, including Don't Look Up, is that the subjects are triggers for me, and they happen too close to real time. I don't need or want to relive that shit.

Vice, about Cheney was that. The Big Short too.

At least with those two, they came 10-12 years after the events (still too soon), but Don't Look Up is about as current as you can get - when you take into account, writing, filming, editing and distribution.  I am still traumatized by BLOTUS & Co and Covid.  And / Or Climate Change.

I could go into detail, but you've lived it, more or less.  Streep is the president - as if women can be president! - and she's good at being bad, or unlikeable. Jonah Hill - also unlikeable, not hard to massage that role - I'm assuming is playing Ivanka via Blotus Jr, with pinch of the dumber one.  No. Not Tiffany. Even in this, she's not represented or matters.

While a movie about a comet wouldn't seem to track with those two traumas, it becomes a pretty good fucking analogy.

You get rallies. You get red blue MAGA Don't Look Up hats. You get your hackles up. WAY up.

The near end of the movie I realized I was sad. Oh, not for the possibility of the destruction of humanity - we are awful. But McKay kept throwing in clips of hippos, whales, deer and the like. Mankind's ultimate demise is fine, but it's sad to think it can impact one some of the better species.

Honestly, except for the Great Gatsby remake, I have never seen Leonardo DiCaprio in a thing. He was pretty damn good here. And the more I see of Jennifer Lawrence, the less range I am seeing that she actually has. It works for this role.

The movie has at least five (!) Oscar winners. And at least three other nominees - so you know it's good. The make-up and fake teeth department worked over time. I almost didn't recognize Cate Blanchett. She was way good. Mark Rylance was one of the creepiest guys I've seen on screen.  Ron Pearlman  - who loathed BLOTUS publicly - was brilliant.

But Ariana Venti?  She was fine in the green room of an entertainment morning show, but having to see her in concert was extremely unnecessary and broke a few Geneva Convention rulings.

There was a line that just me bust a gut, but's not really supposed to be a comedy - though McKay flirts with the whole comedy / tragedy thing anyways.

Word on the street is (thanks Morty) you either love or hate this movie. We, are a divided household. We weren't at either end of that spectrum, but I liked the movie, 710 did not. Well, he gave it a C.  I'd kick it up to a B.

BLOTUS won't think this is anything about him because the president is a woman and he's not. And the red hatters are too stupid to know what an analogy is.

And yes, I made our 2022 movie goal at 15. It's exactly where it was last year, though we did hit 16. We should have done so much more, but we didn't.  I expect similar laziness in the upcoming year.

I’ve seen DiCaprio in three movies. Catch me if You Can, with Tom Hanks . The Beach , with Tilda Swinton. What’s Eating Gilbert Grape. With Johnny Depp, liked him in the Tom Hanks movie would watch it again. He plays a Counterfeiter. Don’t like Jennifer Lawrence and don’t like Some of Streeps movie choices. No contest for me here. Am glad you have a life so I can watch.

My husband, sister, and I watched it this week and we're with 710 on this one.

I thought it was brilliantly written, cast and acted. The dark humor was firing on all cylanders, and I think DiCaprio and Blanchett were particularly excellent.

The satyrical reflection of our collective and current state of mind, what value, and how we interact and treat each other was deftly written - whether that is depressing or sobering I suppose is up to the individual. That isn't to mean there wasn't heartwarming moments, because there are a few but mostly I just loved the absurdity of it all.