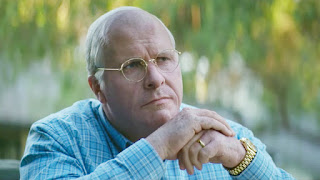 Let's start off here, shall we?

We can talk about the crapfest that is the BLOTUS administration.  ...and it is.

But due to this current situation, people seem to have selective recall when it comes to Shrub & Co.  People seem to think that Shrub is no longer the worst president in history - and that might be the case.

Shrub, let's face it - was / is stupid.  BLOTUS isn't completely stupid, just manipulative and evil. There is a stupid element there, but not like Shrub.

If you're looking for a face of pure evil, look no further than Dick Cheney.  And yes, we saw Vice as our last second to last movie of 2018.

I kind of "made" 710 go. It wasn't on his short list. It was on mine, but for the life of me I'm not 100% sure why.  I liked the Big Short enough - though I didn't love it.  Vice had some of the same players (Christian Bale, Steve Carell, and writer / director Adam McKay).

Vice had a similar style to the Big Short too - a way of incorporating breaking fourth walls to explain things to the audience - some funny, some not as much (for the record, Alfred Molina has an excellent scene!)

Vice also has the same problem as the Big Short. Painful subjects that apparently are not far enough back in history to not have your skin crawl at having to relive it all. We weren't far in when I was just uncomfortable: at the situation and the characters.

Bale does an incredible job - in looks, mannerisms and voice. He is just as understated horrific as the man himself, but I suppose that's the point. And it is why I was so uncomfortable.

Carell - he did an ok job as Rumsfeld in the later years, but came too close to being a slightly more vile Michael Scott in the early ones.

Amy Adams - anyone who's read any of my movie reviews of which she's apart knows she underwhelms me. I won't go as far as to say she's great here, but better than I've seen her in the past and shows a little range (and yes, spare me the Junebug comments).  Of course here she plays a completely unlikeable character. One in which you forget how someone has to just as soul, heart, and moral-less,  to be married to Dick.

Hell, McKay is a little heavy-handed (in a good way) with the Cheney's doing a MacBeth-like scene.

One does tend to forget the evil other players - Scooter Libby, anyone?  John Yoo?  Scalia?  Ashcroft?  Wolfowitz?  Rove?  Though they shouldn't.

Part of me thinks they're hoping people forget about them until a film like this comes out. Then hopefully, they're like "oh shit!"

There is a great tea-cup analogy that at first pass is just ok, but as they tie it back later, it's powerful yet depressing as fuck.  And yes, McKay more than calls out the "liberal bias" though that in itself is tied back to facts.   ....and yes, they put the spin on how 'facts' work today.

While I can see why Vice is movie to skip, on another hand, it shouldn't be.  There are harsh realities we should probably keep on the periphery, and make sure they don't go away - unless those fuckers are tried for war crimes.

Oh - and for the love of g-d, can someone stop trying to make Tyler Perry happen as a "real actor"?  He's like the word 'fetch'.  It's NOT going to happen.

Song by: Steve Miller Band
Posted by Blobby at 12:03 AM

Really looking forward to this, opening here next week, I thinks. Looks v. promising from trailer. Perhaps the geographical distance from the subject matter(s) may help in appreciating it more than you did. In addition, I did like 'The Big Short' more than you, so this could well be a 'goodie' for me.

the W years were fulla evil, but nothing like the current shitstain's evil. I want cheney to die a violent death on the streets where no one helps him, they just point and laugh.

We're still going to see it, but when I heard that Perry was in it, i pictured Madea going off on Dick and wondered, WTF?

@Bob- "...Madea going off on Dick" just gave me the most vile, icky mental picture! *SHUDDER*
I go to movies to escape, so this isn't for me.