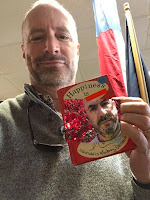 So, Friday afternoon, I getz a text from Mike. You all know Mike, even if you don't "know" Mike.  You know OF Mike. It's probably best for all of you that's the way it remains.

He wondered - he did - if I got lost in the holidays, as I had not asked him to participate in a Golden Globes contest.

Silly me. I didn't initiate. As is the social convention, a lady likes to be wooed and asked. So I asked. She He accepted.

All was good.  Until I looked at the categories and nominees. 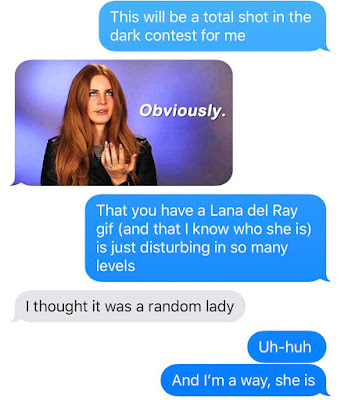 I'm in blue - with the two typos. I'm sure you're all fluent in autocorrect.

But I am right - 'anything goes' at the Globes. I have no idea what I'm doing. My only consolation is: neither does Mike. Not only in general, but specifically to this.

Since he got to me to ask him at the last moment, I had no prep post, so we are just going in with the nominations and the choices - and hopefully some witticisms.

710 saw one more movie than I in 2018. This was it. He knew he had no chance of getting me to go. I encouraged him to go without me.  He claims I'd like half of it. He didn't elaborate. I didn't ask.  KkKlansman probably deserves it more, but.......it didn't have Gaga in it. Lucky them.

Best Actress in a Motion Picture – Drama Glenn Close (“The Wife”) Lady Gaga (“A Star Is Born”) Nicole Kidman (“Destroyer”) Melissa McCarthy (“Can You Ever Forgive Me?”) Rosamund Pike (“A Private War”)

I didn't see it. I have no plans nor desire to see it, but the HFPA gave Madonna a globe for Evita, so anything is possible.  Sorry Glenn - you're a loser.......again.

Not wild about the choices. It will probably go to Poppins, but the question would be 'why'?

Coleman was the best thing about the movie.

Bale was amazing, in such an unlikeable role.  Reilly & Redford were in movies no one saw, except maybe the HFPA.

Weisz and Stone will cancel each other out, though I think Weisz should win. But I like King in general. And honestly, I don't want Adams to win.

It might go to Ali; but Grant might walk away with this, regardless of what I thought.

I believe this was my favourite movie of 2018. I wanted to like the Incredibles more, but Isle of Dogs wins out.

Roma is on our shortlist to see, and the only other one I've heard of is Shoplifters.

Haven't seen Roma.......yet. But by all accounts it's Cuaron's crowning achievement - as if he can do better than Prisoner of Azakban!

It's a talky movie - and they use the C word, which they won't be able to show in the clips.

Why does a Quiet Place even have a score. I mean, "ssshhhhh".  People love schlock, so give it to Shaiman, I suppose.

I'd like it to be Annie Lennox ("Requiem), but everyone raves about a Star is Born. Meh.

It sounds like a horrible premise. I'd never watch it, so of course it will win.

Ooooh. Julia stoops to do TV, let's give it to her.

Because the category is 'best'. And it was.

Bergen and Messing's shows are horribly acted - and worse, not funny.

King won't win for the movie nom, but possibly the TV one. Never even heard of the shows that Arquette and Dern were in.

What is undoubtedly the longest named category, I hope Clarkson wins for anything she does. It might be Borstein, but it might not.

For get being the Fonz; Winkler was both Dr. Saperstein and Barry Zuckercorn.

Mike and I didn't discuss a prize. As he has a new puppy - I'm guessing it might be something pet related. I'm just tossing it out there as an idea.

The big win is in the live "chatting" we'll be doing during the show. I'm sure he'll rip on me, while I take the high road. Of course, here's hoping Ollie poops in his shoes if he hurts my feelings.

As the general awards season approaches I do hope that 'BlacKkKlansman' gets more recognition than it's been accorded up to now, though I doubt if it will.
I think that 'The Favourite' will get more than its due (alas!).
Another one which will suffer will surely be 'M.P. Returns' just for being what it is - a sequel to such a revered film ("Sacrilege!" they cry) though my own admiration for that original is rather qualified. Given that this new instalment had such a mountain to climb which, in my opinion it achieves magnificently, it even surpasses in some respects the Julie Andrews.
Btw: Its box-office takings over here, though not bad, have been lower than expected.
Awards would be deserved for 'Very English Scandal', most especially for Hugh Grant in particular who's been showing some genuinely worthy talents in recent productions.

I like your choices and agree with most ...especially Regina King.
She should win everything.

I haven't heard of most of these shows/movies. I don't watch awards shows anymore. I don't think that the Kennedy Center Honors counts as an award show. I do, however, believe that the awards will go to whoever provided the most bling as a bribe, er, promotional gift to the voters.

How can it be Golden Globes time again? My how time flies when you win award show contest after award show contest. I’ll tell Blobby how that feels. It’s sure to be a rolicking evening as we each battle for picking the most winners. We usually have witty text banter (well, witty “one-way”) until it’s past Blobby’s sleepy time. Given that he’s 2 or 3 times zones ahead or behind me (I can’t keep track), who can blame him for petering out? Probably the frustration of not picking any winners adds to his overall tiredness.

Best Motion Picture – Drama
“A Star Is Born”
If it was just me picking, this would not top the list. It was a good movie, but c’mon.

Best Actress in a Motion Picture – Drama
Lady Gaga (“A Star Is Born”)
Maybe it’s me, but I can’t get over Lady Gaga playing Lady Gaga (see: Julie Roberts, Tom Cruise, and Sharon Stone). But she’s all the buzz, so it would be Golden Globes suicide not to select her. Bet: her acceptance speech will be annoying.

Best Motion Picture – Musical or Comedy
“The Favourite”
I don’t even know what this movies is about. But my secret sources say this is the way to go.

Best Actress in a Motion Picture – Musical or Comedy
Emily Blunt (“Mary Poppins Returns”)
This movie is on our list, but we’ve not yet made it to the theater. Hollywood loves a big old fashioned musical – gotta sing, gotta dance.

Best Actor in a Motion Picture – Musical or Comedy
Christian Bale (“Vice”)
Bonus points for weight gain (wish I was given something besides indigestion and general malise for my weight gain).

Best Actress in a Supporting Role in any Motion Picture
Rachel Weisz (“The Favourite”)
Again – didn’t see it. Don’t know anything about it.

Best Actor in a Supporting Role in any Motion Picture
Richard E. Grant (“Can You Ever Forgive Me?”)
Heard this was an awesome movie. Love Melissa McCarthy. Secret sources say Richard.

Best Motion Picture – Animated
“Incredibles 2”
Am way out of the loops on top animation features. Saw the original Incredibles when it was in the theaters so many years ago. Was pretty incredible. Incredibly.

Best Motion Picture – Foreign Language
“Roma”
Watched this film last weekend on Netflix. Loved it. Am sorry to see it was not nominated for Best Picure. Loved the pace and gentle storytelling.

Best Screenplay – Motion Picture
Deborah Davis and Tony McNamara (“The Favourite”)
Here we go with The Favourtite again. Can’t they even spell it correctly?

Best Original Score – Motion Picture
Marc Shaiman (“Mary Poppins Returns”)
A spoonful of sugar may help Blobby’s defeat go down easier. But he’s being so “My body is a temple” these days, it’s probably more likely a spoonful of flax seeds.

Best Performance by an Actress in a Television Series – Drama
Sandra Oh (“Killing Eve”)
But ol’ Julia doesn’t take home the top acting prize for TV. Oh no. (See what I did there?)

Best Television Series – Musical or Comedy
“Barry” (HBO)
I know Blobby will probably go for Mrs. Maisel. He likes those earthy comedies. Yeah, good luck with that one…

Best Performance by an Actress in a Television Series – Musical or Comedy
Candice Bergen (“Murphy Brown”)
Even though the reboot bombed, it’s one more award for Candy.

Best Performance by an Actor in a Television Series – Musical or Comedy
Michael Douglas (“The Kominsky Method”)
Hollywood loves a scene eater.

Best Television Limited Series or Motion Picture Made for Television
“Sharp Objects” (HBO)
aka what we keep away from Blobby on Golden Globes night.

Best Performance by an Actress in a Limited Series or Motion Picture Made for Television
Regina King (“Seven Seconds”)
It’s good to be King.

Best Performance by an Actor in a Limited Series or Motion Picture Made for Television
Hugh Grant (“A Very English Scandal”)
My heart (pitter patter) says Darren Criss, but my secret sources says it’s going to be Hugh.

Best Performance by an Actress in a Supporting Role in a Series, Limited Series or Motion Picture Made
for Television
Penelope Cruz (“The Assassination of Gianni Versace: American Crime Story”)
What did she say?

Best Performance by an Actor in a Supporting Role in a Series, Limited Series or Motion Picture Made for Television
Henry Winkler (“Barry”)
Because it’s high time we see the Fonz back in the spotlight.

And there you have it ladies and germs. Good night and good riddance.

Glad to hear (couple of hours ago) of Glenn Close's win. One of those few actors/actresses you can bank on to give a solid, credible performance every time. Well deserved.

You should really check out "Escape at Dannemora". Patricia Arquette is amazing (as are Paul Dano and Benicio Del Toro). And why isn't Bonnie Hunt (she has a small role) in more things?