From Time to Time 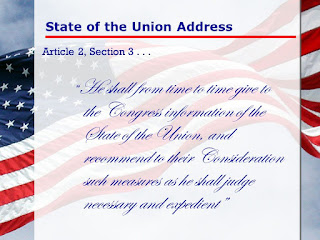 I have never been a fan of Nancy Pelosi.  As IF girls can be Speaker of the House.

Ok........I kid.  But seriously, I never found her horribly effective at most things, and to be fair to her, I can say the same of Newt, Paul, Dennis or Bohener.

They are all dividers, and never truly try to unify the House.  They're not even on the congressional Kinsey scale. There is no bi - just partisan-on-partisan action.

So good for Nance for her letter to the BLOTUS, asking him to put off the State of the Union - or providing it another way.  Except it was totally unneeded. The Constitution (the paper, not the ship....or my early morning walk) says so.

But the Constitution also lays out that the President is invited, by the House Speaker, to give the State of the Union address. Somewhere down the line, 'time to time' became annual. The invite, might not be needed, but has always been given. It's still the President's constitutional requirement to provide the update.  And really - hasn't he been giving those to use daily, 140 280 characters at a time?


Song by: Ozark Mountain Daredevils
Posted by Blobby at 12:03 AM

I'm not a fan of Speaker Pelosi, either, I'm not at all sure she should have been the choice again for Speaker, but that having been said, she's not doing too awfully bad at the moment, and this latest thing sort of shows whose House it is...