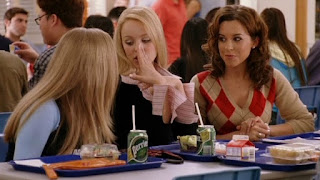 It has been said, that life is an extension of high school.

You see it time and time again, mostly in how people treat each other..........or how they don't.

As it turns out, there is no age limit to this behaviour.

My mother, who is in independent living now, has gotten to experience this possibly for the first time in her life. Ok - maybe not, but you know, it just seems more prevalent.

So Ellie, my mom, sits with "Sasha", "Jane" and "Dorothy".  Oh, and those are all their actual names. I think whomever fake writes the letters for Dear Abby tries to throw us off by using quotes, when it's really actual monikers.

At first Jane wasn't at the table, but a guy at her original table sang through every meal and it drove Jane to ask for a new assignment. Of course, I was curious about his repertoire.

But before her arrival, my mom tried to bond with the other two. Both would tell about their own lives - homes, kids, etc, but would never ask my mother a thing. Honestly, I didn't find this odd. I figure in places like this, people are probably guarded and don't go digging, but they probably have no issues spewing 4-1-1.

Early on, it became my mother's mission to get them to open up or act differently. She doesn't knit or play canasta, so, at least it would help her pass the time.  And allegedly she had some wins as well, I'm sure manipulating the dinner table.

It seemingly got easier with a fourth.

But then it just got weird.

Dorothy and Sasha are alleged friends. But Sasha accused Dorothy of stealing her jewelry. And somewhere down the line Sasha's daughter visited and jumped on that bandwagon, blaming Dorothy. And she didn't want to complain about Sasha to anyone because well, alleged friendship.

Then Sasha started in on my mother.

My mother has macular degeneration. On a scheduled basis - and don't get grossed out - but she gets injections directly into her eyeballs {shudder}.   How this came up at lunch or dinner I don't know, though I'm guessing my mother mentioned an appointment at which she had to go.  Sahsa told my mother she was a liar and went on and on about how this wasn't true.

There was a lot of back and forth with the table members. When it was the three (san Sasha), they all agreed they didn't want her at the table, yet no one was willing to speak up.  No one wanted to be the bad guy.  Yet someone did - and it wasn't my mother. Allegedly.

Sasha has blamed my mother. But I think individually she has blamed the others as well.

At one point, the manager moved Sasha to another table. But when said manager was out ill, Sasha moved herself back.

Apparently, Sasha is all about wealth and bragging rights. No matter the other's ladies accomplishments, or how successful their children, she one-ups them. All. The. Time.  My sister was ready to go in with every piece of jewelry has ever owned just to see if her daughter could one up that.

So upon the return of manager, Sasha refused to move. So the three ladies got a new table and now Sasha sits alone, when and if she comes down for meals.

In a way, she's making everyone's life a pain in the ass, but in another I feel sorry for her. Those places cannot be fun to be in and to be ostracized in the last months / years of your life has got to be tough. I get she's brought it on herself, but.........I'd hate for my mom to be excluded.

My sister, her husband and 710 laughed when we were having dinner with my mom and I said, "on Wednesdays, we wear pink!".

I don't thing my mom got the joke.  Well, I know she didn't.

it happens at work too. there are 7 of us; one guy we nicknamed "the princess" (a str8 guy, BTW). he is like sasha and very anti-social. when "the princess" goes on business trips, the 6 of us are delighted.

I can vouch for your mother's eye injections. They're true! I get one every three months now. Or was miss thang saying your mom was lying about getting them instead of denying the existence of them?

Your mum sounds a hoot. I knew a Sasha and a Jane and Dorothy. Only they were called Ian, John and a Steven and they were all a pain in the arse at 15 years old. Apparently they still are.
JP